"Temples and shrines are places of festival where rituals and prayers for individuals, families and ancestors are conducted to dispel misfortune and to open the path for divine blessings. They are places where you can trace your life to its origin."

Shinto is notoriously slippery to talk about or write about or even think about (suitable, I suppose, for a blog titled "Slipping Glimpser"!) But I am going to try, anyway, with a healthy does of knowing that I don't know what I'm talking about.

Last night I had a rather formal dinner with the Chief Priest, Yamamoto-san and his wife Yukiko-san, along with my guide Ochiai-san as translator (although the Chief Priest speaks some English) and we talked about - or tried to talk about - Shinto. Yamamoto-san said something really wonderful, something like, "In Shinto everything is sacred: the trees, the mountains, the rocks, our ancestors. We bow to everything."

Ochia-san said to me today, "Everything has spirit, even rocks." When I explained about Western dualism, as best I could in simple English, that actually in traditional Western thought almost nothing has spirit, everything is there to be used by humanity, things are inanimate, nature is a sort of machine, even the body is a sort of machine, and the divine is far away in another realm, he looked horrified and incredulous. He couldn't imagine it.

Maybe I should just stop writing there, and we can all contemplate that for a bit, and what it would mean for this world to respect everything, to see spirit and the divine immanent in everything. But of course, being me, I'm going to keep going.


The tripartite symbol in the photo above is everywhere here at Tsubaki Grand Shrine: on ceremonial doors, on the ends of roof posts, on curtains and amulets. It is a primary symbol of Shinto, and is called the mitsu-tomoe, or mitsudomoe. Like all great symbols, my sense is that it has many layers of meaning. Tomoe means "turning", so I like to imagine this symbol in motion, rather than static, a turning wheel, where each of the three parts is in relationship with the others. One source writes, "The circle represents perpetual motion, the constant cycles of life, death, and renewal that govern all aspects of the universe, including divine forces." (From Shinto: A Celebration of Life). The three shapes are often said to represent heaven, earth, and human, in continuous relationship with one another. The space between is what is mysterious and hidden.

Shinto, unlike Buddhism or Christianity, is not a religion of the book, of text, of theology, of "teachings." It strains our Western, Judeo-Christian understanding of what religion is. In fact, before the introduction of Buddhism to Japan in the 6th century, there was no such thing as "Shinto" - there was just what people did in relation to the forces of nature and divinity, without needing a name that would differentiate what they did from some other "religion." Buddhism's arrival from China made it necessary to describe what was not-Buddhism, what had been here before. The word "Shinto" is actually based on Chinese characters (also an import) that meant "way of the kami".

I loved this description of how it might have been in that early time, in a book called A Year in the Life of a Shinto Shrine, by John Nelson:


The early people felt that themselves, the land they lived upon, the mountains, rivers, trees, valleys, mist, and animals that surrounded them were all born of the Kami and thus intimately related. There was simply no such thing as an inanimate universe.

Reading that quote takes me back to what Yamamoto-san said over dinner, what Ochiai-san said to me today, and the mitsu-tomoe, the "turning circle," where human and heavenly and earthly realms are all realms of Kami, all interconnected and interdependent and animate. And I think of how the original places of the Kami were not in buildings at all, but outdoor places of power in groves and on mountaintops.

I read somewhere else that it may be that the original ceremonies for Kami took place in the meeting of the cultivated and the wild, where the Kami of the mountains and streams, so necessary for the health of the rice fields and the villages, were summoned and thanked and prayed to.  I notice that many of the large Shinto shrines I've visited, including this one, are in forests right at that intersecting place, above the fields but nestled in the lower valleys and ridges of a sacred mountain.


Because of this intersection, the forests surrounding (or representing) nearly all Shinto shrines are often the only greenery in urban settings, as if a little bit of the wild is essential for the functioning of the whole, just as wild mountains and their rivers are necessary for bringing water to the fields.

I was surprised to learn that even now "Shinto" is not a term widely used in Japan (though people here were even more surprised to learn that we in America haven't heard of Shinto!). Not many people would say, "My religion is Shinto." In fact, Ochiai-san, one of the priests here at Tsubaki Grand Shrine, told me that even though many Japanese people say that they are "not religious," still, over 90 million people (out of 127 million people who live in Japan) visit one of the 80,000 Shinto shrines in Japan every year (over a million each year to this shrine alone, and at New Year's about 90,000 people visit here). There are hundreds of people walking the grounds here every week. For a non-religious country, people sure seem to appreciate something (just FYI, a "shrine" is a place of Shinto practice, and a "temple" is a place of Buddhist practice). 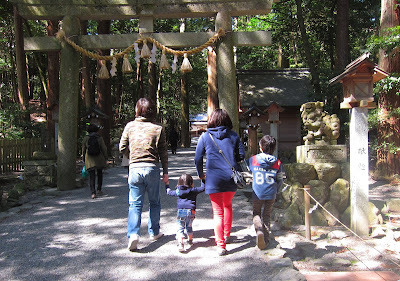 But it seems to me that the mitsu-tomoe represents a lot of what "the way of the Kami" is about. The cycles of birth and death, the interdependence of human and nature, the recognition of ceaseless change within a deeper harmony. It is said there are 8 million Kami in Japan, which means that there is truly nothing without an element of the sacred here, inside a shrine forest or on the busiest city street. But perhaps going to a shrine and walking under its ancient trees helps people remember, even if they don't quite know what they are remembering. People bow without quite knowing why, and something in us respects what is being bowed to.

The Kami don't "live" in their shrines, as we might imagine, whether the shrine is a tiny miniature house, an enormous building, a tree, or a stone. The shrine is a place where human and Kami can meet, where a human being can bow, ask the Kami for help, and the Kami become present in our human calling to them. A particular Kami, like Sarutahiko-no-okami, the main Kami here, can be enshrined in hundreds of different places (although this place is his primary place of enshrinement).

And there are almost never statues of Kami at a shrine - they are hidden, secret, and mysterious, beyond personalizing. But as Ochiai-san told me the other day, with great intensity, "The Kami are REAL." I think he was telling me that to a Shinto priest the Kami are not metaphors, myths, human constructs, or some old tradition. They are true powers, and we can be in relationship with them.

I think a person could spend years at a Shinto shrine and not be able to quite say what is happening there (in fact, maybe the longer you stay, the harder it would be say), but there is something beautiful and mysterious here, in the people and the place, some depth that draws people in under the trees.

This morning, early light, no one around, I watched an older, impeccably dressed man walk in from the road, walk slowly up the avenue of huge old trees, walk first to the main shrine of Sarutahiko-no-okami, then to the shrine of the dancing Kami Ame-no-Uzume-mikoto, the beautiful one, bow twice, clap twice, ring the wooden bell in front of her shrine, bow again, and then make his way back down through the trees.

"The Kami are real."