The Shadow of an Anchovy 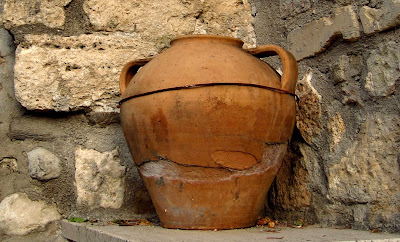 My mother-in-law's family were poor peasants, and they would tell the story of being so poor that instead of having meats at the center of the round of polenta, they had a single small anchovy hanging over the center, casting its shadow. They said that the shadow of the anchovy was all they had to bring a little richness to the polenta.

I was in Italy at the end of October and beginning of November, in the provinces of Tuscany, Umbria, and Le Marche. I was more than a traveler there: I was named for Florence - Firenze to my mother and those who knew me as a child - and my childhood was woven with the narrow streets and convent cloisters, churches and olive groves of Firenze and Tuscany, as I traveled back and forth with my art-historian single mother between the surreally different worlds of the American Midwest and Italy.


From the time I was five until I was fifteen, we lived in Florence for part of every year. I went to kindergarten and fifth grade in Italian schools. I spoke Italian. Some of who I am came from that life, so far-away and mysterious to my American school-mates. I hadn't been back in many years, and this trip was a poignant, sweet chance to be there again with my mother, while it is still possible for both of us.

Although Italy is wealthy now, when I was a child - thirty, forty years ago - Italy was poor, third-world poor, and we were poor too, despite (or maybe because of) our bicontinental life.

When I was small, we lived in a convent pensione across the street from the archives where my mother did her research. She couldn't afford child care, so in the early morning, when I was still asleep, she would go out, buy a roll and jam, sneak back in and leave it by the bed for me. When I woke up I would find my roll waiting for me, and for the rest of the morning, until lunchtime, I would lie in bed, get crumbs all over the sheets, and read, endlessly.

If I really needed something, the Italian nuns were down below, cooking in the big dark kitchen, cleaning the already-shining floors in the mostly empty main rooms, or cultivating the garden behind the building. I remember eating zucchini flowers for the first time, deeply comforting pastina in brodo with grated parmigiano on top, hard Tuscan bread. A great treat was a single Baci, the chocolate and hazelnut "kiss" made by Perugino, or an aranciata, an orange soda.

When we lived in Italy for longer times, we rented an apartment from an English doctor who owned a farmhouse in the hills to the west of the city. The contadini, the traditional Italian peasants who worked the land, lived down below us, next to their animals. Every morning I would wake to the sound of the cart and white oxen going by below our windows, slowly, slowly, with much shouting.


Our back windows looked out over a quintessential, "romantic" Tuscan landscape: hills, olives, dark spires of cipressi (cypresses), stone walls, the old stone village of Pian dei Giulari perched along one side of the valley, just down the road from us. What was concealed was the poverty, the backbreaking work, the deep knowledge that knew how to rebuild the stone walls, how to prune the olives, how to breed the oxen, how to survive. Now most of the contadini, as a culture, are gone, gone to work the well-paying jobs in the cities, and the absentee landlords struggle to keep the vineyards and groves alive without that deep and unacknowledged wisdom.


I remember, vividly, walking as a child on a country road and looking down into a farmyard where a contadini family was gathered around a round of polenta. Polenta was peasant food - no city restaurant would have dreamed of featuring it on a menu - and it was formed into enormous flat cakes, as wide as a circular table. It was cut with a string into wedges (this fascinated me), and each person at the table would eat their wedge toward the middle. In the middle would be whatever protein the family might have, and whoever could eat their wedge most quickly would get more of what was there.


While we were in Italy this time, we spent time with Peggy Haines-Capelli, an American art historian whom I knew and loved as a child and who, unlike us, chose Italy as her home and country. She eventually married an Italian journalist, and is now a widow. She told us the story of her husband's family and the anchovy as we sat around her round table, eating food we had brought back from our trip into the mountains of Umbria: famous tiny lentils from the town of Castellucio, pecorino cheese, salame called "mules' balls" from Norcia, with a white center of lard - a feast somewhere between a picnic and a high tea, rich with the stories of our trip to the wild and mysterious Monti Sibillini, the mountains of the sibyls. When I heard Peggy's story, probably in mid-bite of something delicious, it felt like a koan: what is the taste of the anchovy's shadow?

While I was in Italy I was puzzling over the particular flavor of Italian life - the tremendous soul and depth that can be felt in the simplest village piazza or in the most elegant Florentine coffee bar. There is an appreciation of the sensuous things of the world, which, far from seeming superficial and materialistic, actually feels life-affirming, ancient, hugely sane. How do they do it? And how is it, that with all the force of modernism and wealth and speed, it is still alive, a heart at the center of things, something that can be tasted in the olive oil sitting on a trattoria table or in the syrupy intensity of a morning one euro espresso at the train station? And this story, of the anchovies...I think it's a key. I think it's a teaching story, perhaps for all of us.


We live like gods, these days. Not necessarily happy gods, but gods nonetheless. Few of us can imagine the poverty that would have a whole family only able to eat what is essentially ground field corn and water. No doubt life was hard, even sometimes hellish, for that family gathered around the polenta and that single, hanging anchovy. It drove the man who would become Peggy's husband to spend his life dedicated to defending the poor and oppressed.


But there is also something quintessentially elegant and clever in the story of the anchovy's shadow, although I can't quite put my finger on what it is. If there is only one anchovy to bring a little something to your polenta, what do you do? Can you appreciate the shadow of an anchovy, its salty, fishy scent perfuming the air as you eat? Can you raise your empty glass to your neighbor? Can you laugh a little, at yourself and at life, which is only providing this one little fish? Can you take what you have, a little or a lot, and make a feast? That's what it is - it's something about creating a feast out of famine, out of so little, a kind of grace, in both senses of the word.

That's what I feel in Italy, when I'm there: a soulful, embodied willingness to live, whatever comes. Maybe it's my projection on the place and its people, but I don't think so...I feel and see it with the part of me that was formed there. And as the country teeters on the edge of economic collapse, after so few decades of relative wealth, I think, "Well, maybe they'll be fine. Maybe they haven't forgotten how to live, under those designer clothes and behind those smart phones. Maybe they could teach the rest of us a few things about living."


And as I imagine a loaf of Tuscan bread, just water and flour and yeast, that intentionally hard crust to protect the soft interior, no salt because who could afford salt - and then I remember how profoundly GOOD it is, in its simplicity, in its poverty - it gives me courage.

If we are all (or most of us) going to get poorer in the future, which seems like a distinct possibility, let's do it with class. Let's celebrate the shadow of the anchovy.


This essay is dedicated to Signor Mauro Meniconi, the proprietor of a roadside porchetta van in rural Umbria, and one of the secret saints of the world.

For more photos, go to https://picasaweb.google.com/Firenze33/Italy
Posted by Florence 17 comments: