Japanese Pilgrimage: The City of the Dead


It is night-time, and we are walking through an immense and ancient graveyard. All around us, the huge, straight trunks of 600-year-old cryptomeria, trees, like giant coast redwoods, rise up and disappear into the darkness above, so it feels that we are walking through a forest rather than a graveyard. Stone memorials line the wide pathway where we walk, and continue beneath the trees to either side, as far as can be seen. Some monuments are fresh and white, perhaps only a few years old, while others are covered in a deep layer of moss. Some are massive and pretentious; others are humble, clustered together and leaning toward one another like whispering children. The remains of 200,000 people from the last 1,100 years are all around us.

It is very quiet, except for the chitters of the flying squirrels, high in the trees above. Our little group speaks nearly in whispers as we walk in the dark: it doesn't seem like a place for raised voices. Unlike a cemetery in the West, there are no bodies here, or even the ashes from cremations. Beneath each stone memorial is a single bone: the nodobotoke, or Buddha bone, a small bone from the neck, shaped like a seated Buddha, carefully separated from the rest of the ashes after cremation.

This is my introduction to the Okunoin cemetery on Mount Koya, one of the most sacred places in all of Japan, where the spirits of commoners, samurai, monks and aristocrats have all lain down together in silence beneath the great trees. 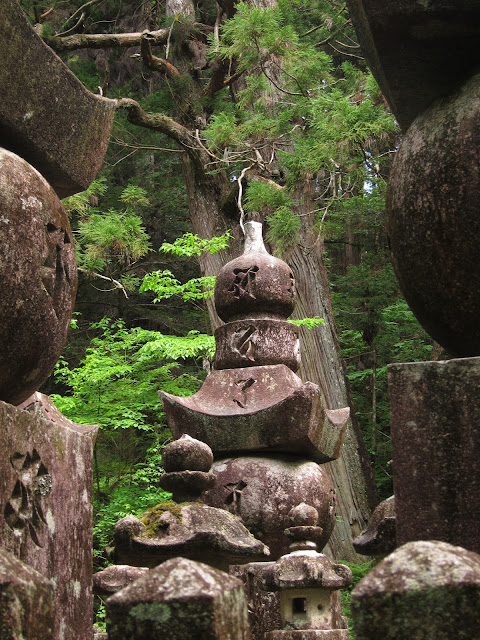 We walk a gentle uphill slope through the dark graveyard, and across a series of small bridges. Before the third bridge, the monk who is guiding us, Nobuhiro Tamura, stops and tells us solemnly that beyond the bridge is the heart of Mount Koya, the mausoleum of Kobo Daishi, or Kukai, the 9th century monk and teacher who brought Shingon Buddhism - esoteric Buddhism -  from China to Japan. Kobo Daishi founded the first monasteries on Mount Koya, at 2,600 feet in the remote wilderness mountains of southern Honshu, the main island of the Japanese archipelago. Since the 9th century this place has been the heart of Shingon Buddhism in Japan, and once had more than 1,000 temples nestled between its eight mountain peaks. The whole complex is like an immense mandala, and at the center of the mandala is the Okunoin graveyard and the mausoleum.

Our monk/guide tells us that it is believed that in the year 835, when he was 61 years old, Kobo Daishi walked into that mausoleum, sat down in meditation, and has been in a deep meditative state ever since, for 1,178 years. He has been receiving teachings in the Tushita heaven from the next Buddha, Maitreya. When he wakes and speaks, he will give the greatest sermon the world has ever known, and that's why 200,000 people have chosen Mount Koya for the final resting place of their Buddha bone, so they can be there when the great sermon is given. 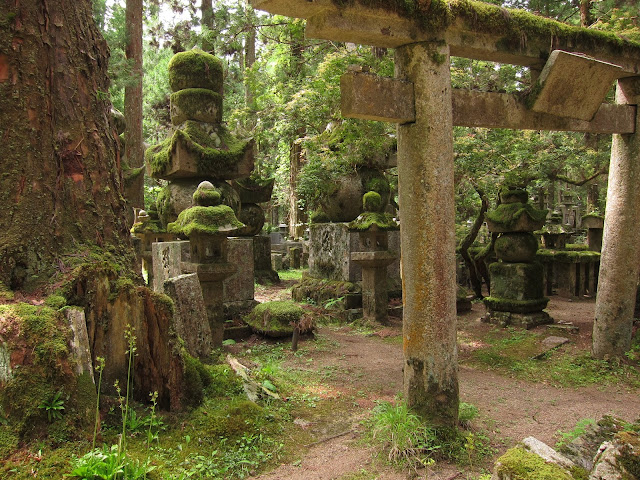 (This poem by Kukai is particularly touching to me because there is a kind of beautiful conifer on Mount Koya called the Koya pine, or Japanese umbrella pine, known as the koyamaki in Japanese. I walked beneath it in the mountains around Mount Koya and saw many offerings of its branches on altars and on memorials in the cemetery. It is a living fossil, a species more than 230 million years old with no known close relatives. It is also one of the five sacred trees of Japan. There are so many koyamaki around Mount Koya that I can only imagine that it was this kind of pine that Kukai lay down beneath, illuminated by moonlight, so long ago.)


Our group of Zen pilgrims (17 Canadians and me) stayed in a temple on Mount Koya, Ekoin, for two nights. (To learn more about our pilgrimage, read this.)

There are still more than a hundred temples clustered in a high valley amidst the peaks of Mount Koya, and a thousand monks and nuns, and Shingon pilgrims come from all over Japan and walk (or more frequently, ride the vertiginous tram) up the steep mountainside to stay for a night or two in a temple, along with curious Japanese and Western tourists. It might be possible to visit Mount Koya, eat some good temple food (and Japanese vegetarian temple cooking is deservedly famous), buy a few souvenirs, gawk at the famous gravestones in the cemetery,and get back on the tram and go home, relatively unmoved. But I found that the place, and the teachings there, seeped into me like pure mountain water, so even without understanding Shingon, I found myself moved, opened, and touched by something without name.

Perhaps we were also lucky. Our guide that first night in the graveyard was a young, very sincere monk from the temple where we were staying. Nobuhiro-san speaks and writes English. Here are some of the notes I took, as he offered his understanding to us, standing in the dark in the Okunoin:

"The purpose of Shingon meditation is to understand that 'inside' and 'outside', which we normally think of as opposed to one another, are actually one thing....Buddha Nature is everywhere...What makes esoteric Buddhism 'esoteric' is that the teachings cannot be really properly spoken in language. Instead, they are hidden in the world -- in the moon, in plants and trees and animals. The world is speaking the teachings....Kobo Daishi said that our minds are like the moon. The moon is bright because of the sun's rays, and our minds are bright because of the primordial sun Buddha. Just as the moon appears to change from day to day, so do our minds, but actually it is always the full moon, clear and bright."  - Nobuhiro Tamura

At each of the entrances to Mount Koya there was a women's hall where nuns practiced, always outside the gates. There is a path of many miles that leads from one gate to another, skirting the very edge of the sacred area, and this was the women's pilgrimage route, as close as any woman pilgrim could come to the center of the mandala, that mausoleum where Kobo Daihsi sits in meditation in the valley far below.

Three of us on our pilgrimage were ordained women priests, and we three decided to walk the women's pilgrimage trail. We began at the only surviving women's hall, the Niyonindo, where we read about Kosugi, who founded the hall:


According to an old story, there once was a young woman named Kosugi who lived at an inn in the province of Echigo. Her life was full of hardship, but she was saved by Kobo Daishi. Kosugi became a nun and opened here, at the top of the Fudo slope, along one of the pilgrim roads leading into Koyasan, the first so-called "women's hall". She looked after women pilgrims, who at the time were not allowed to enter Koyasan. Kosugi is now venerated as Kosugimyojin, a guardian deity of the Nyonindo hall.

We spent a day on the steep, up-and-down trail, often in silence, considering those women who had walked here for a thousand years in prayer, those women who had lived in the nun's halls, helping the weary pilgrims as they reached the gates, watching the men pass through, the women stay outside, century after century. Only one of the women's halls still stands, but at each place where there had been an entrance and a hall, we stood in silence, considering.

The following photos are from the women's pilgrimage route.

On our last morning I returned to the Okunoin, the great graveyard, this time in daylight, and wandered among the stones in early morning light. I had brought a brush and black ink with me on the trip, and I sat on a mossy root and sketched the leaning stones, the tree trunks, the offerings of Koya pine.

I found that I could both celebrate the grandeur of a place of such deep practice and great piety, and mourn the way it had excluded women for so long. I don't really understand - how can I understand, from the viewpoint of a woman of the 21st century? - but I know that the practice of Koyasan did not stop at its gates, that the gates themselves, and the women who lived at the gates, were integral to the mandala.

I wish I could meet one of those women who sat outside the gates for a lifetime, waking up as she served the pilgrims. I wish I could do three bows to her, offer incense to her, and tell her that her practice inspires this woman of the future, as I walk the hills she walked, stand in the place where she once stood.

And really, as Kobo Daishsi himself taught, "inside and outside are the same."