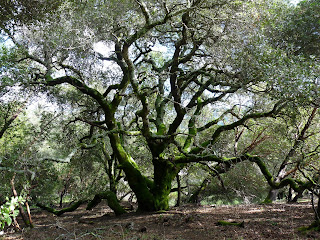 My apologies for a long posting hiatus: I've been finishing up fieldwork in the California Sierras and the Columbia River Gorge on the Oregon/Washington border (and driving back and forth between the two!). My 2009 field season, which started at the beginning of March, is finally over, though I'm not complaining - surely I have some of the best work in the world, from walking the Mohave desert in spring flower time to walking the edges of clear sub-alpine lakes with mountains all around. That said, there were some moments this year when I wondered how many other people in their mid-40's make their living bashing and crawling their way through thick brush for hours, or struggling up steep slopes climbing hand over hand through vine maple in ninety degree heat. Some days in the field are bliss, and some days are...well...slightly less than blissful.

But I really want to write about weddings today. A few months ago two very sweet young people, Sophie and Justin, asked me if I would officiate at their wedding. As an ordained priest, I can legally perform weddings, but their wedding was my first. Neither of them are Buddhist. I was honored that they asked, and I also knew that a "traditional" Zen wedding would not make any sense to them. I write "traditional" in quotes, because in many parts of Asia it's not at all traditional that Buddhist clergy perform weddings - in Japan, Shinto priests perform weddings (and Zen priests are in charge of funerals), and in SE Asia, couples are married in civil ceremonies and go to the local monastery for blessings.

But since Zen came to the West, there have been Zen weddings. Zen weddings generally look like other vow-taking Zen ceremonies, but in a wedding the couple take the bodhisattva precepts together, rather than individually, as people do in ordinations. Zen weddings are quite beautiful, in their way, but rather serious and stripped-down compared to most American weddings - very appropriate for Zen students, but not so much for people outside that world.

Sophie and Justin and I worked together to develop a wedding ceremony that was true to them. I had found a version of the precepts developed particularly for weddings by a priest at San Francisco Zen Center (and which I modified a little more), and they really liked it, which made me happy too. I realized that I needed to bring some of the forms of Zen to the wedding - to wear robes, to have an altar, to offer incense - and that all those forms helped me to help support them, and to be true to myself. The rest of the ceremony was much like a traditional American ceremony - vows and rings and attendants and our other lovely rituals.

I realized at the rehearsal that the most important gift I could give them was stability and centered calm. Weddings are really insane events, particularly for the bride and the bride's mother, but really for all the family members. I could bring the thousands of hours of zazen that are woven into my body right there into the middle of the wedding, and it could help everyone. And that's what I did. I felt like my body became a big bowl that was large enough to hold everyone - the bride and groom in their innocence and beauty, family, friends, caterers scurrying around,sky, oak trees - everyone and everything there. And I asked the people who were gathered there to help me make the bowl, so that together we could support the two who were marrying. The ceremony itself was surprising, emotional, and filled with beauty and heart.

What was most surprising was what Sophie and Justin gave me, as they made their vows of commitment to one another, smiling into each other's tear-filled eyes.

I come from a family of many divorces, and I've been married and divorced. I married sixteen years ago, and I married with all my heart and with every intention of being together for a lifetime. Five years later it came apart in fire and pain, and nearly swept my life away. Not surprisingly, I'm a little cynical about marriage and its possibilities - so much so that I wondered whether I was the right person to "celebrate" a wedding. I tend to think and say that marriage is an outrageously brave and foolhardy and noble act, in this time of such easily broken vows - like two people diving off a cliff together, the blue water far below.

But as soon as I stood there with them I knew that this wedding was not about me, and I completely forgot all my ideas about marriage when I saw and felt the love and happiness radiating from those two, all the way through them. To stand with a man and a woman as they make lifelong vows to one another, as they prepare to have children together, as they are moved to tears by the beauty of the other - well, I can't think of anything more inspiring, more of an honor to witness and support.

I can't believe that the universe has arranged itself so that this is possible for me. Somehow I'm empowered to help with these sacred vows. It feels a little like being a midwife, helping a marriage to be born, with all the wonder at the miracle that one feels when a new life appears. And after all, a new life IS appearing - the new life of the long journey of marriage. We said the old words, "Till death do you part," and I felt the resonance of life all the way to death, and the grief of parting, right there in the middle of the new life coming into being.

And something in me was born that day too. I don't have words for it yet, but I can feel it in me. Something humbling, sweet, and unexpected.

I had worried about marrying people and then having the marriage "fail", but that changed for me. I realized that no marriage "fails". Some last a lifetime, some last a year, but I think all marriages actually last forever. The resonance of those vows and that love goes on forever, whatever happens next, even through other marriages and vows. I knew that before, because I feel my own vows and marriage inside me, but I really knew it as I midwifed those vows that day two weeks ago. And what happens next is out of all our hands - everyone's hands. Like a new child, the marriage will have its own life, its own joys, its own sorrows. All we can do is bow at the wonder of it.

So I feel pretty lucky right now. And even luckier that in two weeks I will help with another wedding. Maybe I'm not so cynical after all. Or maybe something in me is healing, as I stand in a circle of lovers, surprised, amazed, and grateful.


Here are the precepts that Sophie and Justin took that day, with my introduction:

As a support and preparation for your wedding vows, and for a life of kindness, peace, and happiness with one another, I offer you these ten ancient precepts, or vows of harmony. As I say each one, please bring them into your heart. Please remember and practice them as an ever-deeper path of love, through all that the future may bring you. In this way, you can ride out the storms when clouds hide the face of the sun in your lives -remembering that even if you lose sight of it for a moment, the sun is still there. And if each of you takes this responsibility, your lives together will be touched with beauty, compassion, and delight.


These are based on the ten "grave precepts" taken by Zen practitioners. If you're interested in the more traditional Zen precepts, you can find several versions on the Everyday Zen website.
Posted by Florence 6 comments: