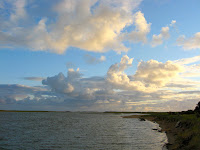 I’m staying on the shores of , a big bay on the southern coast that opens out to the Pacific, the largest bay north of . The first time I saw this place, it stole my heart: the light on the water and sandy shoals, the birds wheeling above in the gray skies. A few years later, a village on the north Bay became my refuge and occasional home.

Shoalwater, Willapa …the words soft in the mouth, sibilant like rain on water. was the old name for the bay, back when schooners tried to thread their way forty miles from the mouth of the bay through the sand shoals and squalls and big tides to the harbor at the mouth of the .

Back then the low hills were rich in old-growth western red cedar and hemlock, the huge, shallow bay was rich with native oysters, and the eelgrass beds nurturedmillions of young salmon. Every year hundreds of thousands of shorebirds would settle on the shoals and mudflats on their journeys to and from their breeding grounds in the north, recovering and growing strong for the next leg of their flight.

The early settlers got rich gathering up the native oysters and sending them to Gold Rush San Francisco, and by 1894, the oysters were nearly gone. The old growth lasted longer, until the mid-20th century. Then became a backwater, a quiet, poor place, left mostly to the rain and tides.

One thing still thrived and grew in the bay, a slow cancer. Back in 1894, when oyster spat was brought from the East Coast to replace the native oysters that had been decimated by over-harvesting, something else came with them. The spat were kept alive in boxes packed with moist layers of another East Coast native, Spartina alterniflora.

The Atlantic oysters failed, but the spartina thrived, growing on the sand and mud below the high tide line where the shorebirds fed, seemingly barren places that supported great life and diversity just beneath the surface. The spartina formed dense patches that trapped more sediment, converting the intertidal zone to meadow. Eelgrass beds, juvenile salmon habitat, shorebird feeding areas…all gone.

For most of its first one hundred years in the bay, the spartina spread slowly. In 1984, there were just a few hundred acres of the grass in the bay. Then it exploded, and by 2003, there were 20,000 acres of the tidelands completely dominated by the grass, and it was increasing by 20% a year. It was like a wildfire, killing everything in sight.

The cabin where I stay is close to a tidal channel that drains a large salt marsh and sand flats. Across the channel is a deserted sandy island. In the few years that I’ve been here, I watched the spartina fill in the tidelands and saltmarsh, until there was little else. I would try to dig the smaller clumps, but it was like flailing at the edges of a monstrous growth; the next year there would be even more.

I seldom saw shorebirds here, because the invertebrates they depended upon couldn’t survive amongst the spartina, and the dense growth provided cover for their predators. I knew that this was happening everywhere else in the bay, an inexorable loss, a helpless grief I felt every time I walked the shoreline.

I came back to the bay a few weeks ago. I’d been gone a long time, since late summer last year. I arrived back at Willapa in early twilight. I got out of the car, stretching cramped muscles from the long drive, and heard the thin high calls of godwits nearby. I hurried down through the beachgrass and then stood, stunned at what I saw.

The tide was low and shorebirds were everywhere, feeding, calling, flying. Plovers and sandpipers and dowitchers and dunlins, companionably chatting with one another as their bills probed the wet sand. The big shorebirds were there too: godwits and curlews and whimbrels and willets, their very names a kind of ancient poetry. I had arrived at a place I thought I knew and found it reborn, alive in a way I’d never known.

Over the next few days I visited the beach many times, each time near to tears, grateful beyond words. The water flowed smoothly between the open sand shoals, eelgrass exposed at the lowest tides. At night I heard flocks of shorebirds calling out of the dark sky as they flew, and wheeling down to land just a few hundred yards from where I lay. Brant- beautiful black geese – roosted on the island. A place that I thought I knew had been transformed, had come alive like a beautiful animal, breathing in the dark, life flowing richly in its veins.

The rebirth I saw wasn’t a fluke. It was born of hard work and controversy and a great determination to bring Willapa back to health, a valiant attempt to undo the damage that had begun nearly a century ago, and that threatened not just my little spot, but the very fabric of the bay, its rich and extraordinary ecological integrity.

It took a long time for anyone to realize that there was a problem in , but when the bay began disappearing under the dark green grass, there was finally a rush to stop it. Millions of dollars of federal and state money were thrown at the problem. The biologists – some of them people I know - tried everything – digging, mowing, plowing, biocontrols…nothing worked. Finally they went to pesticides. The two that worked are called, quaintly, Rodeo and Habitat, two “less toxic”, non-bio-accumulating herbicides approved for aquatic environments. When they combined the herbicides with mowing, the spartina was killed.

In 2007 and 2008 the people with their sprays and special mowing machines came to my corner of the bay, and I watched acres of dense grass open up again. Above high tide, the native plants began to come back. And by this year, 2009, the shorebirds had their habitat back. This part of the bay teemed with life in a way I had never known. By this year, through great effort, they had reduced the spartina in the bay to less than 1000 acres.

But what about the herbicides? Even “less toxic” herbicides are still toxic to some extent. Some people fought tooth and nail to keep the spraying away from their beloved bay. Can I blame them? We’ve made so many mistakes in the past, overlooked effects we didn’t want to know or see. It’s hard even for me to write this; I feel that I’m somehow betraying my own ideals of working in harmony with the natural world.

But on the other hand, we made this terrible mess here, inadvertently. A whole system was dying – I saw it with my own eyes - a system that millions of non-human beings depended upon. I know people with cancer who did everything they could to avoid chemotherapy, as I’m sure I would. But would you withhold chemotherapy from someone if it meant a good chance of recovery? Could we have said, “Ah, too bad about Willapa Bay and its beautiful shorebirds, its salmon, its ancient harmony. Let it go.”? 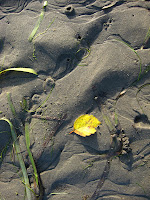 There’s something beautiful about what was done here – a great effort to save a place, beyond human needs. I think that’s what moves me. Maybe we’ll find out it was a mistake. But meanwhile, I listen to the shorebirds happily feeding, and I bow to those who worked so hard to bring them back, mistaken or not: the politicians, the biologists, the humble people who walked the mud with backpack sprayers, day after day in the rain and wind. Thank you, thank you.