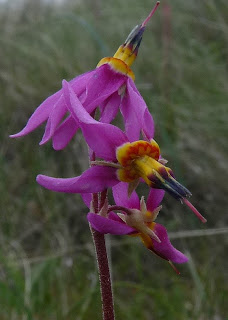 Nobody sees a flower, really, it is so small. We haven't time - and to see takes time like to have a friend takes time. - Georgia O'Keefe

Three weeks ago I led a wildflower walk in the coastal hills just north of San Francisco, on a blue-skied, blue-oceaned, emerald-green-hilled California early April afternoon. A poet and Zen practitioner named Genine Lentine had asked me to lead the walk as part of a series she’d organized (Space Walks). I had said I’d be happy to lead a wildflower walk, but I wanted to do more than point out the flowers and give them names: I wanted to explore the relationships between botanical language, deeply seeing the natural world, and the flowers themselves, blooming so extravagantly in the spring wind. So that’s what we did together, a little group of people gathered on a weekday afternoon, admiring spring wildflowers and thinking together about naming, seeing, knowing.

I carried a shoulder bag full of heavy books out into the hills with us: my huge Jepson Manual of the Plants of California, my slightly smaller Flora of Marin County, a little paperback book on spring wildflowers of the area, and finally, a folded brochure of the wildflowers of the Marin Headlands. Botanizing and heavy books go together. As a child I never went anywhere without a book; as an adult I carry books into the wilderness, my keys to knowing what I see, my keys to the door of intimacy with the wild plants around me, my keys to conserving and protecting the rare plants hiding in the deserts and forests. It fits somehow with who I am, my twin passions of language and the natural world, married in the books I so willingly carry on my aching shoulders.

It was language that brought me to plants in the first place. Specifically, a little poem by Gary Snyder, read first when I was eighteen or so ("For The Children"):

To climb these coming crests, one word to you, to you and your children:

He’s speaking of knowing where we live, what we live amongst, as native people know the living world around them in deep and sensuous and essential detail. Living not on the land, but within it. I read that little stanza and knew that I wanted to “know the flowers”. I had no idea that knowing the flowers would lead to a lifelong commitment and love for the green, unspeaking world. I could never have imagined that my “knowing the flowers” would support me, literally, for much of my life.

Botanical jargon is a language of deep observation. The Inuit may have many words for different kinds of snow, but botanists have just as many elegant and exact words for the shape of a leaf or the kinds of tiny hairs on the stem of a flower. Leaves can be simple, compound, pinnate, palmate, bipinnate, tripinnate, lanceolate, oblanceolate, caudate, spathulate, acute, dentate, lobed, ovate, crenate, spinulate….these are just the words that come to mind at the moment – there are dozens more, each with a very specific meaning, a shape in the world. Hairs can be stellate, dendritic, hispid, sericeous, tomentose, glandular, postulate, puberulent…again, just a few of the words that come to mind, among many others.

This is a language of seeing, seeing made manifest on the page. When a plant is first described, formally, a description of the whole plant, from roots to stems and leaves and flowers and fruits, is written and published in Latin. Anywhere in the world, someone who knows this botanical language could make a painting from the Latin description which would strongly resemble the plant itself, enough that someone could probably match the illustration to the plant. This language, and the scientific names that go with it, is a language of seeing and knowing.

With this language, I can go anywhere in the world, look carefully at a plant, and begin to know it, begin the knowing of it. It’s just the first step, and not the only one, but it’s a great step forward into relationship.

It’s not uncommon for me to come across people who feel that classification and naming are actually a problem, a separation from the world rather than a meeting of it. What I say to them is, “When you first meet a person, you don’t know their name or anything about them. How close are you to them at that point? Then, over time, you learn not only their name but their family, the way they look when they’re sad or tired, where they went to college, the names of their children. Does this lead to great intimacy or less?”

It’s the same with plants. All that language is a bridge to intimacy, not a wall. I remember that before I began learning the names of trees, the forest was a “wall of green”. Then it became “beech, maple, oak”, and I began to see that some forests were mostly beech, others mostly oak, and that this was the land and soil itself speaking in trees. Some places say “beech”, some places say “oak”, but before I can hear that speaking, I have to know the difference between a beech and an oak.

I think there’s a notion that naming is new, a product of our scientific mania for classification, but I remember learning, years ago, that the people of the Yakama Nation in eastern , whose culture is strongly tied to the root plants of the arid shrub-steppe, distinguish MORE species of biscuit-root (Lomatium) than we do, not less. It matters more – they are deeply intimate with biscuit-root, and have been for thousands of years. Names matter.

At one point on our wildflower walk, on a spectacular bluff overlooking the Pacific, I invited everyone to sit down next to a plant and look at it closely for five minutes. When we gathered again, everyone’s eyes were sparkling. Each person described something wondrous: one woman had looked closely at a poppy, and had seen the individual pollen grains dusting the base of the petals, had seen the light through the orange petals as like the light of a flickering fire; another person had looked at the long fruit of stork’s-bill, and had noticed that as it dried it curled into a fantastic parasol. Each person was amazed at the beauty and intricacy of what they had seen.

This is what I do every day that I’m out in the field, using the language that I have painstakingly learned over the decades to look closely at plants - how they grow, their leaves, their flowers, their fruits,. And from that knowledge comes the ability to name – and protect – some of the rarest plants in .

And joy. The joy that each person felt on the bluff that day is a joy I still feel after all these years, a joy that arises naturally in, as Georgia O’Keefe said, “seeing a flower”. I don't know what it is exactly, but try looking closely at a flower, even a humble weed in your backyard, and see what happens.

I Am Not There, I Do Not Sleep

I offer this old poem in honor of a beautiful lady, Hisako Kimura, who was born June 23rd, 1918, and who died gracefully at home this last Sunday evening, April 5, 2009. Everyone who met her loved her. Now her generous spirit has gone back into the world as a blessing.