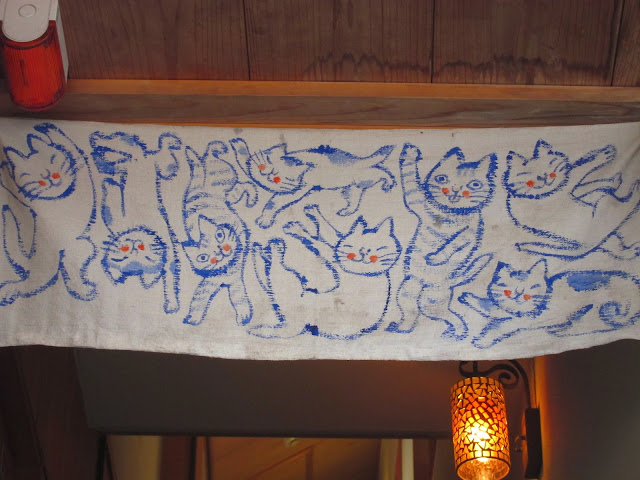 Japan! Three days ago I crossed the international dateline for the third time in my life, flying back to Japan three years after my first trip here. Last time I was part of a group of Canadian Zen students, the token American; this time I am traveling alone as this year's recipient of the Tsubaki Grand Shrine Scholarship, an award from the Unitarian Universalist Association and Tsubaki Grand Shrine, given to one UU seminarian each year: a chance to be a guest of one of the oldest and most important Shinto shrines in Japan. Shinto is the indigenous religion and way of life of Japan, predating Buddhism in Japan by many centuries.

Two days ago I was met at the airport by Ochiai-san, an English-speaking Shinto priest at Tsubaki (which means "camellia" - and a few of the camellias are still blooming here) Grand Shrine (or jinja in Japanese). I will be here at Tsubaki, staying at the guesthouse of the shrine, until the 23rd of March. From the 23rd to the 30th I will be visiting Kyoto and Kamakura, also on my own.

Tsubaki Grand Shrine is an extraordinary place, and their generosity to me is also extraordinary, truly welcoming me into all aspects of life inside the shrine. I am aware that very few people, Japanese or foreign, have such an opportunity, and I will try to share it with you, as best I can, as I write here over the next two weeks.

Tsubaki celebrated its 2,000th anniversary a few years ago - yes, that is the correct number of zeroes! - and more than a million people visit this shrine, nestled at the foot of steep, forested mountains, each year. They come to honor the kami, to pray, to ask for blessings, to get married. Four couples were married just today, a sort of river of bridal parties, gorgeous kimonos and western suits intermingled. A small army of shrine employees take care of everyone: nearly thirty priests and miko (shrine maidens), and cooks and guesthouse workers, presided over by Guji-san, the 97th chief priest of the shrine, and his wife, also a priest and the daughter of the 96th chief priest.

The kami are central to Shinto, sometimes mistranslated as "gods" in English. I think I should just quote from the Historical Dictionary of Shinto, since understanding kami stretches the bounds of the English language. I am quite sure we do not have an equivalent understanding. Here is some of what the dictionary says: "...a unique force or power in nature, animals, or people that engendered attitudes of reverence, fear, or gratitude in those who perceived it...anything that filled a human being with wonder and awe." Japan is sometimes called "the land of the kami".

Kami can be forces of nature (fire, water, wind), old trees, mountains, divine beings (Ameterasu omi-kami, the kami of the sun and the principal kami of Japan), and even great human beings, after their death. Until the end of World War II, the emperor of Japan was considered a kami. Kami are enshrined in particular places. Tsubaki, for instance, is important because it is the main place where Sarutahiko-no-okami, the guardian of the Japanese land and safe travel, and his wife Ame no Uzume no mikoto, the kami of dance, are both enshrined. It is also believed to the place where the grandchild of Ameterasu descended to the earth, welcomed by Sarutahiko-no-okami, and so it is deeply resonant for Japanese people as a place of origin.

Kami often have an animal messenger, and for Sarutahiko-no-okami, the messenger is the frog, so there are whimsical frog statues all over Tsubaki.

Kami can help human beings, and so people come to places like Tsubaki for blessings and to ask for help from the kami. The kami can also bless weddings and children, so there are many weddings here. There is also a deeper sense that the human being can come into greater harmony with the kami and with life itself through purification practices. Here at Tsubaki, the practice of purification by water, misogi, is central, a ceremony where people stand beneath a sacred waterfall. People come from all over Japan to participate. People also come to have their new cars blessed and purified, which makes sense to me! I watched the ceremony yesterday - on the weekends about a hundred cars a day are brought to the shrine for blessing.

You might wonder why in the world there is a connection between Unitarian Universalists in the US and a very traditional Shinto shrine in Japan, and why Tsubaki would support and host a UU seminarian each year.

I'm still learning about all the reasons, but there is a spirit of interfaith commitment here that goes back decades. Tsubaki is the only Shinto shrine in Japan with foreign branch shrines (one in Granite Falls, Washington, that I visited last summer) and Tsubaki priests have a long history with the International Association for Religious Freedom and with a beloved Japanese Unitarian minister who died at the age of 106 several decades ago, Shin Ichiro Imaoka - most UUs in the US are not aware that there is a long history of Unitarianism in Japan.

Tsubaki also had a connection with Ueshiba Sensei, the founder of the peaceful martial art of aikido, which is now practiced around the world, and with the practices of a form of esoteric Buddhism/Shinto called Shugendo. In fact, the former head priest rebuilt a Buddhist temple on the Tsubaki shrine grounds in honor of the founder of Shugendo, En no Gyoja, very unusual for a Shinto shrine. Buddhism and Shinto have always been intertwined to some degree, since Buddhism arrived in Japan in the 5th century, but during the Meiji period and the advent of "State Shinto" in the late 19th and early 20th century, there was an effort by the government to clearly separate them. But I see, being here, how much overlap there really is, even in some of the forms of Zen that I know so well.

For my part, as a Zen Buddhist practitioner and biologist, when I was considering applying for the scholarship, the chance to learn about the other major spiritual tradition in Japan, one that influenced Zen in many ways, and that also has a deep relationship with the natural world - well, it was irresistible.

My very first day in the country started at 8 am with Ochia-san ushering me in to meet with Guji-san, the head priest of Tsubaki, attending the morning service with the shrine staff, then Ochiai-san taking me to Ise Shrine, about an hour away, the most important, holiest Shinto shrine in Japan, where Amaterasu omikami is enshrined, the kami of the sun, the principal kami of Japan, and the female ancestor of the Japanese imperial family, Ise is enormous, its lands encompassing an area about the size of Paris, much of it wilderness. Shrine forests are one of the few places in Japan where ecologists can see what the original forests may have been like.

The buildings of Ise, all 125 shrines, are rebuilt and recreated every twenty years, exactly as they were before, along with all the ritual treasures - swords and fans and drums - everything. This rebuilding has been going on for centuries, and it keeps alive many traditional arts and artisans.

You might expect that the most important Shinto shrine in Japan, where the emperor comes to preside over ceremonies, would be grand and gilt-covered, but instead the buildings feel timeless and simple, with massive thatched roofs and smooth polished beams of light-colored wood, surrounded by courtyards of white and black gravel stones. I really felt the affinity with Pacific NW native architecture there, and I feel this a lot, in Shinto. I think it would be extraordinary to bring native elders here. If you would like to see some photos of the buildings at Ise, click here.

But the best part of Ise for me was visiting the area of traditional shops on the way to the main shrine, crossing the Ise River on a beautiful bridge and then sitting on a veranda overlooking the river eating a kind of sweet made only in Ise, red bean paste - though it looked purple - on the outside and mochi (rice) on the inside, the tea water heated in enormous kettles over a wood fired oven. 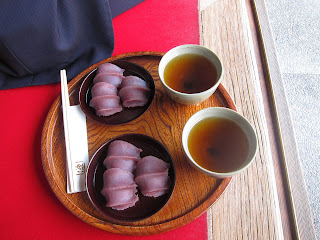 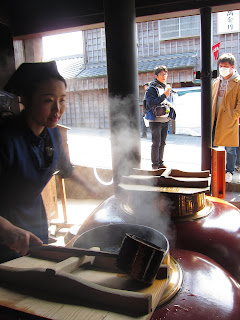 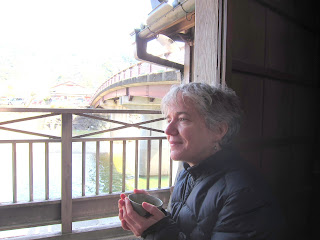 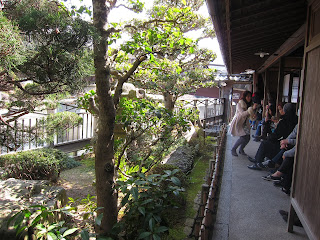 I haven't been in many places in Japan where all the buildings are traditional, tile roofs (many of them bright blue here - I have a bit of a tile roof fetish, so the roofs made me very happy) and the streets just wide enough to walk, filled with cheerful-seeming Japanese Ise visitors, like being somewhere on a festival day - no sign of foreign tourists, except me. It was magical.

I had a feeling that the little place where we stopped for sweets and tea (they served nothing else) had been serving customers for hundreds of years, pilgrims and visitors to the shrine. I often find that there is a moment when I "arrive" in a place, and I arrived in Japan on that veranda overlooking the river, eating Ise sweets and drinking Hojicha tea with a Shinto priest!

So here I am, in a country that unexpectedly captured my heart last time I was here, with its grace. Nonetheless, it does feel like another world, and right now I am swimming in near-total cultural immersion. I haven't spoken to another native English speaker since I left San Francisco, and despite my best intentions to study Japanese this winter....well, I didn't. And oh, I am regretting it!

I am surrounded by kind and friendly people, but I can't communicate with most of them, other than a few basic greetings and smiles and bows. I am in a fascinating religious environment but am often only guessing at what is going on. I know this is the experience of many Americans traveling abroad, monolingual as we tend to be, but it's hard on me. I want to connect, and to communicate, but I am so limited.

Finding one's feet in another culture always feels like a spiritual exercise to me - a practice of surrender, letting go, being willing to be foolish and lost - hard practices for someone with pride and a sense of competence when in her own culture. So I am immersed not only in a deeply traditional part of Japan, but in my own struggle to be here. So much to learn! More later.