Silence and the Mind of Winter 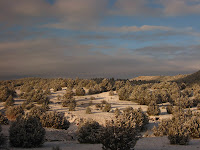 Happy New Year! I'm humbled and awed by something I've just read, an extraordinary essay about silence by a man now silenced by Lou Gehrig's disease. I'd love to share it - if you have a moment, please read it - it's astonishingly beautiful, and utterly evocative of winter and its gifts: Winter Mind.
Here's the Wallace Stevens poem that begins the essay:
One must have a mind of winter
To regard the frost and the boughs
Of the pine-trees crusted with snow;
And have been cold a long time
To behold the junipers shagged with ice,
The spruces rough in the distant glitter
of the January sun; and not to think
of any misery in the sound of the wind...
from The Snow Man by Wallace Stevens, in The Collected Poems of Wallace Stevens, 1954, Alfred A. Knopf.
Winter and silence dance with one another....I think of the traditional Zen 90-day practice periods and the silence of the zendo in the winter dark, the rain on the roof the only sound in the whole world. Or the silence of a morning after a deep snow, the single set of footprints or the brush-stroke of an owl's wing as it swept down on a mouse the only marks of life in the whiteness.
In a month I'll enter 30 days of silence at Spirit Rock . Although I've entered into silence many times in my life, I never know what gifts will come my way from such a radical choice. I know that I'm already leaning toward it, like a tree leaning toward the season when the sap goes down into the roots and the moon tangles itself in the bare branches, dreaming in the dark.
Posted by Florence