Musings from a snow-covered houseboat 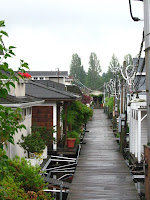 What makes community, REAL community? I mean people who take care of one another, not because they've made a New Year's resolution to be a better neighbor or friend or church member, but as naturally as one would reach behind for a pillow in the middle of the night, without weighing the trouble or effort.

In some places this wouldn't even be a question; I don't think my African brother-in-law spends a lot of time wondering about how to create community - he's part of many communities, as simply as drawing breath. But some of us seem to have lost the knack. As a neighbor said to me once years ago, with a perfectly straight face, "I'm from southern California. We don't believe in talking to our neighbors." I have a few thoughts on the ingredients of real community: proximity, mutuality, interdependence...all the usual suspects. But after the last week, I think there may be one ingredient often overlooked by the urban planners and idealists: genuine hardship or danger - the kind that makes everyone remember that none of us can make it alone.

I spent Christmas week snow-bound on my sister's houseboat in Seattle. It began snowing the week before Christmas, and just never stopped, and the snow piled up deeper and deeper on the twenty or so little Victorian-era houseboats tied cheek-by-jowl on her dock, whispering down on to every surface, turning all but the water white. Every morning I would wake to the grating of many snow shovels just outside the window of my room. I would peer between the wooden slats of the Venetian blinds, and would see all the men of the dock out clearing the snow and ice that had accumulated overnight, working together to keep us from slipping off into that cold, dark water on either side. There was talk and laughter amid the serious work, and by the time we went outside with my sister's two month old baby, the long dock was cleared of snow.

One night after dark, as I was singing to the baby so that my sister could get some work done, a neighbor came to the door, a woman in her sixties. She had noticed that the snow had slid off our roof on to the deck around the first floor, and she was concerned that the snow would unbalance us. She had two shovels; one for herself and one for my sister. Another morning I heard a commotion on a neighbor's roof: she and several other neighbors were on her slanted roof shoveling the snow and ice into the water, seemingly calm in the face of the danger of sliding into the water along with the snow. A houseboat unbalanced by snow is no joke: each is held up by a system of underwater air-filled barrels, and too much weight on one side could cause serious trouble, for the boat itself and for the whole dock.

All the houseboats are tied to the same dock with many lines, and so a problem for one becomes a problem for all. All of us had to negotiate the slippery dock to make it to the street. There was a strong sense of camaraderie and tolerance for one another on the dock, and I felt that if we had needed anything, a dozen hands would have reached out to help. It felt very different than an ordinary urban neighborhood: closer, warmer, more interdependent. But then again, people had chosen to live this way - in small spaces, close together, on floating homes that are vulnerable to the natural forces in a way we land-livers don't usually consider.


Years ago, I spent three months in the depths of winter at Tassajara Zen Mountain Monastery, deep in the Los Padres Wilderness Area east of Big Sur. That January, it rained without ceasing, and all of Monterey County was declared a disaster area, wracked by floods and mudslides and tremendous difficulty. Tassajara is a cluster of mostly unheated buildings, surrounded by wilderness, and 15 miles in on a road that is rough even on a good day in midsummer. Multiple slides on the road blocked us from the outside world for days at a time, but we were fine, better than most of the rest of the county. There were sixty people there; we had food and geothermal energy and strong hands and a commitment to take care of each other. What would have been dangerous in an ordinary suburban community was just another winter day at Tassajara.

This summer Tassajara faced even more extraordinary challenges: a huge wildfire raged for weeks in the mountains, and eventually the fire-fighters retreated. It was too dangerous to stay and fight the fire, they said. But some of the residents of Tassajara stayed, and when the fire arrived from four sides simultaneously, they saved the place (see the dramatic story here).

We live in a big, seemingly anonymous country, where many of us feel isolated and inconsequential, disconnected from others and from our own power to be helpful, to be bodhisattvas, whether by shoveling a neighbor's roof as the water looms below, or fighting a fire to save a place you love. (Instead our biggest contribution, we're told by the news, is to go out and spend our dwindling dollars to "save" the economy.) We think we choose this way of life, like my neighbor from Southern California, but we're also trapped by it, and by the coldness it breeds in the heart.

I wonder a bit, as things get harder economically, whether there may be a place for real community to grow again, like grass in the cracks of the sidewalk, born of actually needing each other just a little bit more, born of hardship, of discovering that we are truly like my sister's houseboat community, all tied to the same dock, knowing that when one is in danger, all are at risk, and when one is helped, all are made more whole.
Posted by Florence

Email ThisBlogThis!Share to TwitterShare to FacebookShare to Pinterest
Labels: community