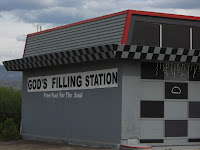 I'm a Zen Buddhist now, a Zen Buddhist priest, but I was raised by a mother who was and is a secular humanist, and proud of it. On my mother's side, I have to go back three generations before I find a church-going ancestor. My great-grandfather founded a Unitarian church in the tiny prairie town of Cherokee, Iowa, around about 1890. Unitarians- those apostles (if I may be so bold to use the term) of religious and intellectual tolerance - are not even considered Christians by most Christians, and often don't consider themselves Christians. Needless to say, my great-grandfather's church was short-lived. What was he thinking? That farmers wanted to drive into town to hear about tolerance on Sundays? Later generations dispensed with church altogether. There were better things to do on Sunday mornings. Gardening. Reading the Chicago Tribune. Sleeping late after a night of drinking and talking. Oh, the possibilities were endless.

So it's hard for me to connect with Christianity as a belief system...it's just not in my family culture. I grew up in a Midwestern Bible belt town, and not being Christian was like....being a communist (even now I feel like whispering), but I wasn't Christian, so I kept pretty quiet and went to my friends' churches some Sundays. When I visited my father, we went to the Episcopal Church, well washed and well dressed. But Methodists, Mormons, Episcopalians and Catholics were all equally mysterious to me, and I would listen to the readings and sermons like an anthropologist hearing of strange aboriginal rituals. As an adult, I watched the rise of the Christian right, as we all have, and I was frightened by what seemed like a movement opposed to all I believed and all I was. Over the years, as I became a more religious person myself, I developed a deep appreciation for Catholic monastics and others who give themselves fully to their faith, but I was and am still afraid of evangelicals and the world they seem to want.

But maybe all this would have been relatively abstract without a personal connection. I have a beloved person in my life who is a strong evangelical Christian. I think I can write with some certainty that she wishes with all her heart that I would wake up one day and be done with this Buddhist stuff, and for her, that wish is part of her love for me. I struggle not to take personally her sense of the deep mistakenness of the religion that has brought so much joy and depth to my life. And if I'm honest, I have to admit that I wish she practiced a different form of Christianity, one more open to the beliefs of people like me. I wish she could celebrate my happiness as a Zen Buddhist, rather than mourn it, and in that way I'm also intolerant, also wanting her to be different, as she wants me to be different. I write this calmly, but it's been a potent source of suffering between us for years now, and sometimes a barrier in our connection with one another.

I don't like where I stand with all this. I can feel my own intolerance and fear,and I know in some ways it's justified, but I still don't like it. Finding a way beyond it has been elusive, but there are little glimpses, now and again.

I got a little glimpse on election night this year. I was standing in the brightly lit lobby of the local community college, exactly 50 ft. from the polling place as per regulations, handing out fliers from the local Democratic Party on the Democratic position on each of the many, many state propositions, including one (which ultimately passed) creating a constitutional amendment that stated that marriage could only be between one man and one woman. I hate doing stuff like this, I hate the polarity of it, but I felt that I had to participate, so I nervously handed out my fliers to those who were interested, and, coward that I am, hoped that no one would start yelling at me for my political beliefs. A nicely dressed woman walked by me and politely refused my flier. After she voted, she came back out and started chatting with me. She was a Republican, and not just a garden-variety Republican, but a fundamentalist Christian and a stalwart member of the local Republican Party. She and I talked and talked, there in the lobby on election night as history was unfolding, knowing that we stood opposed to almost everything the other believed.

We laughed at our differences, we talked about writing - she was a freelance writer - and the economy and her business and my health. She would sometimes catch someone walking by who I had missed with my fliers, and she would say, motioning toward me, "This lady has something for you." Astonishing. We talked for nearly an hour, standing in front of the polling place. Talking with her was a great balm for my spirit, because even though I knew that my candidate had a good chance of winning that night, and hers of losing, I desperately wanted to go beyond the divisions that separate so many of us. That night, we met, she and I, and we did go beyond those divisions, without ever losing our integrity. I don't know how - it felt like a kind of miracle, an election night miracle, what I would have most wanted that night.

Another miracle happened last night. I was driving the long stretch of freeway up, up, up from the desert to the mountains and Flagstaff, and I was listening to Terri Gross on Fresh Air. She was interviewing the Reverend Richard Cizik, the vice president for governmental affairs of the National Association of Evangelicals, a powerful lobbying organization that represents 45,000 churches. I got a big surprise as I listened to the interview: he had a calm thoughtfulness, a sense of a deep personal moral compass without the concomitant judgment of others I can easily associate with evangelicals. He said that he believes that contraception should be available to prevent unwanted pregnancies. He said that he believes in the importance of caring the the earth, and that he's worked hard to bring global warming to the table in his organization. I thought, "If I found myself across the table from this man, I would like him, I would respect his views, I would feel that we could talk." I found it tremendously uplifting and hopeful, to hear an evangelical voice that didn't scare me. I could have hugged him, then and there.

It's a long road toward peace, and that's how I think of it. There's a quiet war (and sometimes not so quiet) war going on in this country, and even in my own family and my own heart. Although I don't want to be naive, I also don't want to feed that war. I want to see beyond it. Every once in a while I do, and I realize how much I wish to live in a world where all religions, and their deep commitment to goodness, can flourish without impeding one another.

If you'd like to listen to the interview, go to Fresh Air:Cizik
Posted by Florence

Email ThisBlogThis!Share to TwitterShare to FacebookShare to Pinterest
Labels: religion