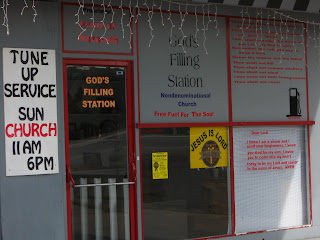 For those who read my blog on December 3rd (God's Filling Station), you may remember that I wrote about how moved and inspired I was by an NPR interview with the lobbyist for the National Association of Evangelicals, Richard Cizik. Yesterday I happened to pick up an old newspaper article from December, and read, with sadness, that Richard Cizik was asked to resign from his nearly 30-year position as the Washington lobbyist for the NAE, as a direct result of that interview with Terry Gross. You can read about here.

Apparently his primary mistake was to voice some tentative support for civil unions, but it's clear from the article that there have been powerful voices within the evangelical movement who have been hoping to find a way to silence him for a long time now. He was a fervent advocate of "creation care" - Christian environmentalism - and tremendously concerned about global warming. I can only hope that voices such as his - voices of tolerance, compassion, care for the non-human world, and willingness to compromise - will continue to step forward within all religious traditions. We need them so desperately.

On a related note, I just found an article in Buddhadharma on Buddhism and a response to global climate change. That lead me to a really quite wonderful online magazine: EcoBuddhism Quarterly Review. All religions - all people - run the risk of complacency in the face of global warming. We Buddhists may pride ourselves on our tolerance, but we can indeed by self-referential navel-gazers on occasion, and we too need to be reminded of the connection between our practice and compassion for the world, human and non-human.
Posted by Florence