Winter in the Bosque 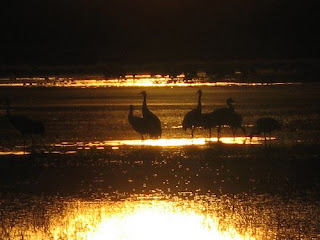 One of the most beautiful sights I know in this whole wide world is the rising up just after dawn of thousands upon thousands of snow geese and sandhill cranes from the wetlands of the Rio Grande in southern New Mexico. Seeing this is like....seeing the first day of creation. For three winters now I've been able to make my way to this place, the Bosque del Apache National Wildlife Refuge, sometime between November and February. It's become a winter ritual, an annual renewal of wonder.

We stay nearby, then wake up in the cold New Mexican dark, an hour or more before even the faintest glimmer of dawn light, and drive to the refuge. We huddle in the car in our winter jackets with thermoses of hot tea and chocolate, sleepy and a little disoriented. The refuge is big, and we never know which shallow pond will be the one the birds have chosen to roost in for the night, so we drive with the windows open to the cold night air, listening for the speaking of geese in the dark, the stars big and bright above us.

Finally we choose our spot. By then there is a hint of light to the east. We can see the water,but not the birds - just their sleepy calls, beginning to build in intensity out beyond our sight. All around the refuge are our fellow pilgrims, waiting too, some of whom have traveled from across the country to see this daily miracle. The air is bitingly cold, that cold that descends at the last hour of the night. We pile out of the car and wait, binoculars ready.

Then time speeds up somehow, and the light is coming fast, and we can see the birds. Spread out before us are hundreds - no, thousands - of sleeping sandhill cranes, knee-deep in water, their heads still tucked into their warm tail bustles. A few begin to move like slow dancers. And between them and beyond them like a drift of snow are the geese, wide awake, calling to one another louder and louder, an urgency surging through the flock. The water is still, mirror-like, and the birds are reflected in it.

A few geese leap into the air, but the others aren't ready to follow- though the calls are deafening by now. The eastern horizon is stained with orange and pink. The human anticipation is building too...at one of the most popular spots, huddled people line a wooden deck with spotting scopes and cameras, nearly silent as they wait.

Then, without warning,it's time for the geese to rise. With a sound like a freight train, voices lifted and thousands of wings beating the water and then the air, two, three, ten thousand geese rise up at once into the now-blue sky, the black tips of their wings only accentuating their utter, snowy whiteness. Sometime they fly only a little way over our heads,and we lean backward, half in flight ourselves, as if we were briefly members of that ecstatic flock. I have felt like my heart was going to leap from my chest as the geese circled higher and higher, headed out into the dawn.

And then the geese are gone, their calls fading. But there are still the cranes, slower and more dignified in their entrance to the day. They drift across the ponds as if still dreaming, wreathed in mist,sometimes calling in their strange purring, bugling voices, sometimes leaping in the air for a moment, a prelude to their spring courtship dances. Then they too begin to fly, lifting their huge wings in the first sunlight, and eventually the ponds are nearly empty, a few pintail ducks floating about, a few downy feathers scattered across the surface.

To see such a sight in this 21st century is to be reminded of the almost unimaginable abundance of wildlife that once filled the skies and water and land all over the world: the red shoals of salmon nearly blocking the northwest rivers, the great migrations of bison, the passenger pigeons darkening the sky for hours. Now there are just glimpses, like this one, reminders that this is what life does, given half a chance. It sings in cranes and rises up on ten thousand snow geese into the dawn, and it sings in us too, inexplicably. Whatever our troubles as a species, and they are myriad, we are also animals that would come to this place before dawn and stand here together, just to be reminded of the deep grace at the heart of the world.
Posted by Florence