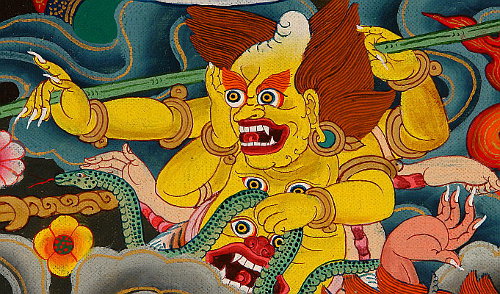 The nun Soma was a disciple of the Buddha. One day she was deep in meditation beneath a tree in a forest grove. Mara, the Lord of Delusion, approached her, cloaked in invisibility. He whispered in her ear, “Because a woman has a naturally limited consciousness, and the realm of wisdom is hard to reach, no woman has the ability to attain it.”
Soma recognized Mara and rebuked him, saying, “How could a woman’s consciousness be a hindrance when her heart is set on liberation? Am I a woman in these matters, or a man? This question has no power over me. Mara, begone!”


And he was gone.
From the Therigatha

For years now I have been thinking about, studying, and practicing with the modern-day equivalent of Mara, the Lord of Delusion, the one who visits Soma in this ancient Buddhist story. I call him "The Inner Judge" or "The Inner Critic."  Whatever you choose to call he/she/it, its voice is unmistakable. It whispers in your ear, in just the words that most hook you, "Who are you to think you can meditate/sing/write/paint/love/awaken (fill in your blank here ______)?"

The effect is powerful and immediate, if you buy the story: a sinking of energy, a feeling of hopelessness, a desire to quit whatever you are trying to do, a deep sadness. At its most virulent, it takes the form of self-hatred.

Even the Buddha was whispered to by Mara, on the night of his enlightenment, "What right do you have to seek enlightenment?" And in response the Buddha called on the earth to be his witness, in the famous earth-touching gesture, and the earth shook and roared in response. Sometimes this gesture is also called the "subduing Mara" gesture.

I became aware of the spiritual consequences of this inner voice through the work of the teacher Byron Brown, and his book, Soul Without Shame. Years ago I attended a one day retreat with Byron Brown at Spirit Rock, and was so convinced that I needed to work with the inner judge that I signed up for a five day retreat with Byron later that year.  I have been using what I learned from him ever since, and sharing with others too, because without an awareness of the inner judge, spiritual unfolding can come to a standstill, shanghaied by self-judgement.

Over the years of being aware of the inner judge and its tricks, I have become much less frequently or thoroughly at its mercy. But every once in a while I get hooked. I'm thinking about this right now because for various reasons the inner judge has been paying me a visit over the last few days. It's not fun to hear Mara's whisper in my ear. Sometimes it's not even a story: just a vague sense of dis-ease, an undefined sense of lack or shame.

So what to do?

First of all, awareness. Awareness, awareness, awareness. Half the battle is just knowing you're under attack. As I said, the judge doesn't always speak in words...sometimes it's more of a vague drop in energy, a sudden loss of confidence. Sometimes there are words, even a recognizable voice. If I am saying awful things to myself in the voice of my first grade teacher or the meanest kid I knew, then chances are good that the inner judge is in town.

Now, awareness might not seem like much, but I've found that awareness, all by itself, can take away a lot of the judge's power. As the story at the beginning of this post tells us, "Soma recognized him." Sometimes just the recognition is enough to dissolve the whole thing, open up freedom. There are lots of stories of the Buddha and Mara (you get a sense that by the end of Buddha's life they were old friends), and always there is this element of recognition and naming, and the sudden release: "And Mara was gone."

Byron Brown suggests various approaches if awareness alone doesn't break the spell (and it is a sort of spell), and I think the approach depends on the person and the situation.

One possibility is what one might call the "wrathful" approach, like those compassionately fierce Tibetan deities stamping on delusion in order to bring freedom. This is using strength or aggression: "Stop!" "No!" "I don't believe you!"  After all, the inner judge is an internalized authority figure, and one way to deal with an unjust authority figure is to take back your own power, your own authority. I have to admit that this hasn't been so effective for me. The danger is that the judge will just up the ante, and start yelling back. Then you have a yelling match inside. But this strong approach was what Soma does in the story, and it works well. "This question has no power over me. Mara, begone!"

Another possibility, more my style, is compassion. An inner judge arises out of a false sense of protectiveness, a false authority. But if I saw a child being belittled or discouraged by a parent or teacher, even a well-meaning parent or teacher, I would want to protect that child. I would want to sit down with her and tell her how wonderful she really is, how deserving of love and praise. We are children in the face of the inner judge, and we can treat ourselves with the kindness we would wish for from the adults around us. It is a sad thing when a human being is judged or attacked, whether from the outside or the inside, and compassion is a natural response. Even imagining putting my arms around myself can help.

A third approach is humor. Often the suppositions of an inner judge are, frankly, ridiculous:  "You know, if you go to that party, they will all stare at you, laugh at you, and talk about you behind your back. You should stay home." Or, "Your painting looks like it was done by a third grader. Tear it up immediately," An appropriate response might be, "Oh, come on! It's at least fifth grade level!" Sometimes just identifying the absurd words of the judge can lead to laughter. This has worked fairly well for me too, over the years.

And the inner judge really can dissolve just as fast as Mara does in the story. One minute whispering menacingly, the next minute gone, leaving you sitting quietly in the forest. Just like any other thought, the judge only has the power we invest in it. Once seen through, there's nothing left, not even a puff of black smoke.

As I write this, I feel a prayer rising up in me. "May anyone who is besieged by inner judgments find freedom from them. May all belittling, cruel and limiting thoughts dissolve into the light. And may each of us know and recognize our own unique beauty, our own capacity, and the gifts we bring to the world."