A few weeks before I left for for my field work in Southeast Alaska, I was on a conference call with the four other biologists on the crew, all of whom had logged serious field time in Alaska, from seabird surveys in the remote Pribilof Islands to laying out huge timber sales on the Tongass National Forest. I was the newbie, the innocent, the lower-48-only idiot. I had no pride to lose, so I asked, “Hey, what is the best footwear for working in Southeast Alaska?”
The response was unhesitating and simultaneous: “XtraTufs, preferably with corks.”
I was not quite willing to admit at that moment that I had no idea what XtraTufs were, but I jotted the name down (Extra-Toughs? Extra-Tuffs?) in my little notebook with all the other tips (full working-man’s raingear – none of that Gore-Tex crap – boot dryers, fleece gloves with neoprene palms for the devil’s-club, Rite-In-The-Rain field paper….)
I was going to be PREPARED, by gum. I did know what corks were, though I’d never worked in them: they’re a set of wicked spikes that fit into the bottom of the sole of the boot, designed to grab on to slick logs so that you don’t go head over tea-kettle into the aforementioned devil’s-club.
(A digression here: devil’s-club, Oplopanax horridus, is a well-named Dr. Seuss-like being with enormous spiny leaves atop a long, bare spine-studded stem. I knew it well from the West Cascades of Washington, but only when I got to Alaska did I see devil’s-club growing in thickets tall enough to hide a basketball star. It seems to prefer steep slopes where an unwary sliding biologist will be likely to grab the spine-festooned stem as a last resort.)

An innocent-looking patch of devil's-club
I wasn’t so sure I wanted corks, especially after I heard stories of neophytes putting the spikes through their own raingear and shins, but I was determined to get XtraTufs, whatever they were. I went online and read this: “XTRATUFs are American-made neoprene boots that provide 100% waterproof protection with all-day comfort for the MOST SEVERE fishing, farming, and work conditions.” Sounded like the conditions I was heading toward. They looked like an expensive version of a basic rubber boot, but if my experienced Alaskan co-workers said I needed them, then clearly I needed them, and no questions asked.
Finding them – and extra-tough raingear to go with them -turned out to be another story altogether. I don’t want to go into the embarrassing details here, but I’m on the small side. I have been called (in a friendly manner) “height-challenged”, and I often save money by shopping in the children’s section of REI.
I quickly discovered that the iconic tan and brown XtraTufs are found primarily in marine supply stores, the kinds of places that cater to commercial fisherman and aspiring stars of “The Deadliest Catch”. Ditto for heavy-duty raingear. Now I KNOW there are women and children on boats all the time, but tell that to the makers of these things. In their world, all human beings are at least six feet tall and weigh over two hundred pounds. I could have fit at least two of me in the men’s extra-small rain bibs, and for a while it looked like my search for the essential XtraTufs might fail altogether.
Eventually I found a store that carried the smallest possible size of XtraTufs – men’s size 5 – and by some miracle, and with heavy socks and a pair of insoles – it seemed that they more or less fit me. I walked out the proud owner of the indispensable Alaska boots, and in retrospect, I shudder to think of how I would have felt if I had been unable to procure XtraTufs. I had no idea of their role in coastal Alaskan culture. Those of you who have been there are surely nodding knowingly now.
I will say that the raingear search was harder. Five marine stores in three different towns later, I was about to surrender and buy bright pink little girl’s raingear. I knew it was silly to care, I knew a Buddhist practitioner should be beyond “praise and gain”, but it was really hard on my dignity as a field biologist to imagine showing up in bright pink raingear. On the other hand, showing up without any raingear at all seemed like a truly bad idea.
In desperation, I spent two hours combing through a vast supply of raingear seemingly designed for Mr. Universe, until I found bright blue bibs and a jacket that I thought I could wear without tripping over my own hems or losing my hands inside the sleeves. I was quite pleased with myself, since I had avoided the deadly pink raingear, but I must admit that just the other day I put on the bibs for a walk in the rain with friends, and my friends burst out laughing. I have the sneaking suspicion that I looked like a large, overly ripe blueberry up there in the Alaskan rainforest. Maybe the only reason that the bears left me alone was that they were doubled up with laughter at the sight of me.

Photo by Emily Drew
Thus armed with a ridiculous quantity of brand new outdoor gear, I journeyed north, by Alaska airlines to Ketchikan, then by ancient float plane to Prince of Wales Island. I brought hiking boots along with my XtraTufs, because I’ve always worked in hiking boots and I couldn’t imagine that they wouldn’t be appropriate somewhere, sometime. But they weren’t.
Nothing made it clearer just how wet this part of the world really is than discovering the astonishing, absolute necessity of high waterproof boots at all times. Years ago I did wetland delineations, using plants and soil to identify boundaries of wetlands. I’m pretty sure that a wetland delineator could draw a great big circle around Southeast Alaska and call it good. There are dryer forests there, but even dry forests are covered with a dense, deep layer of sopping wet moss – moss everywhere, on the ground, on fallen logs, on upright logs, on rocks….like an emerald green blanket thrown over anything remotely horizontal. In fact, not only did I wear my boots all the time, I wore raingear nearly all the time too, rain or no rain. The first time I crawled over a big moss-covered log with no raingear on was my last.

XtraTufs doing their stuff in a mudflat
Within days I discovered - and I’m really not exaggerating much here at all - that no one wears anything on his or her feet, at any time, other than XtraTufs. Not just my seasoned field crew, but everyone. Not that we saw many people, but those we saw had XtraTufs on. Outside fading, dilapidated cabins, you could see a line of XtraTufs on the porch, matching the sizes of the men and women inside. In fact, I remember, on our last day, checking in with the floatplane company, and seeing a young, very pretty, very chic, well-dressed woman, waiting for the plane too. What was she wearing on her elegantly crossed feet? ExtraTufs, turned fetchingly down at the ankle. She made XtraTufs look like the sexiest thing north of the Canadian border.
I’ve even had a fantasy that babies have been conceived in Southeast Alaska by parents wearing nothing but XtraTufs (giving “rubbers” a whole new twist).
Here’s the funny thing, after all: XtraTufs are not all that great in the woods. Their soft and flexible neoprene provide little ankle or arch support, which are real issues when a person is on his or her feet for many hours a day, covering miles of uneven, very slippery, sometimes steep terrain. Sometimes I’d be going downhill through the endless little muddy streams and sphagnum, wincing as I twisted one ankle or the other about every five minutes. They’re probably great on a fishing boat, but a fishing boat is a far cry from the woods. A good pair of ordinary rubber boots would have probably been better. Nonetheless, I cringe to think of myself pulling out my cute little bright blue rubber boots (and oh, wouldn’t they have been fetching with my bright blue raingear?)
I have a suspicion that part of the reason terrestrial biologists wear XtraTufs in Southeast Alaska is the same reason that I might wear XtraTufs again if I went back, even if it meant sprained ankles after a day in the woods: they are a true symbol of Southeast Alaska, recognized by everyone there. They express your knowledge of the conditions and your readiness for anything – a day in the rain, a day fishing for salmon along the river, a day stalking your winter deer in the muskeg, a day out crabbing on the high seas, even a day hunting rare plants in the woods. The way they say, “This is one hell of a wet, difficult place, but I’m up for it, I’m prepared, I’m tough.” 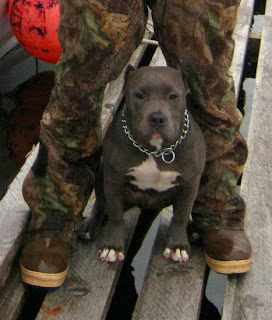 Spencer Richter, with his pit bull Bristol and his XtraTufs
And Southeast Alaska demands a lot of her people. Her people are not just tough, but extra tough. And they have the boots to prove it.
Posted by Florence