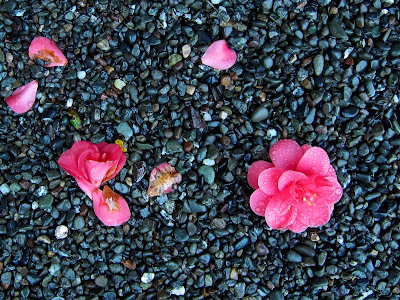 In a residential Zen practice period, sesshin is just a slight intensifying of the life everyone is already leading, but for us, out in the world, it is a dramatic transition into a different way of being. Cell phones are turned off, books are put down, activity is minimized, and all of us live by a schedule that starts at 5 am and goes on until 9 pm. It is a taste of the monastery.

Our sesshin is held at the Santa Sabina Center, which is an old convent, a place where Dominican nuns who were considering final vows lived and prayed. Now the nuns are gone, but I feel their presence there, in the lovely, flower-strewn, feminine inner garden, so like the courtyard gardens of Italy that I played in as a child, in the small chapel with its wooden choir stalls, in the rectory with its long tables. There is a long association between Catholic monastics and Buddhists: I think there is a similar flavor: an appreciation for silence, for depth, and for sincerity. 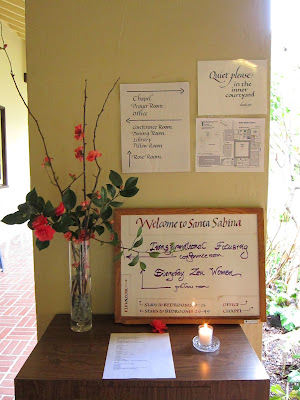 Silence. I remember my first silent retreat, held at another Northern California convent. The huge relief of letting the mask of my persona crack and loosen. I cried at the end, when we were all talking again, because I was so sad to feel the mask return -- that desire to be seen in a certain way, that desire to project a certain image. Many people are frightened at the thought of a silent retreat ("ack, I don't want to be alone with my mind!") but almost everyone I know has found that silence is a gift, an immense resting place where the personality can just give it up for a while. And I think there is an unnoticed hunger for silence in our culture, right alongside the fear of it. We are so seldom at rest.

I think also there is sometimes a sense that silence is an inward experience. Oddly, that's not really the case. When the voice ceases, there is suddenly room for the rest of the world: birdsong, wind sound, cars passing by. And not just sound, but all the senses waken and clear: the sight of the stars can bring tears; a cookie served at tea is the most delicious ambrosia. Silence is deeply sensual. It is interesting to think about how love making is often silent. Silence is intimate, as close as skin and breath. 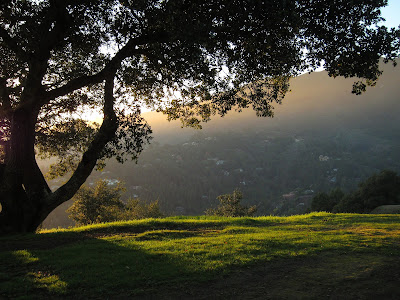 But as I considered how some people in the practice period will be at the sesshin, and some people can't be at the sesshin, I started thinking about silence in a new way. There is overt silence -- the ceasing of speech -- but then there is the silence that is larger than any particular choice around speaking or not speaking, meditation or non-meditation. Silence can be found anywhere. In between my words there is silence. At the end of a breath there is silence. Most of the natural world is silent, most of the time; the tomatoes in the garden are silent, the oak trees in the back yard are silent.

And perhaps (this is something to explore) there is even silence right in the midst of the loudest sounds. Sound depends on and arises from silence, so surely silence is always there. What makes an operatic aria so exquisite? The silence that surrounds the notes. What would life be like if we were listening to the silence as well as the words of our loved ones? If we felt the silence in the middle of the city, buried in the ambulance sirens, permeating the rush of traffic?

I remember once someone talking about being annoyed by the little sounds of her fellow meditators on a retreat, and then realizing that she had set up a dualistic idea - they were "out there", snuffling, breathing too hard, whatever, and she was "in here", wanting silence and not getting it, assaulted and offended. So she started exploring what happened if she heard those sounds as her own sounds, not as something separate. Well - I leave it to your own exploration, what happened next.

So now I think it's time for me to stop talking.

I'd like to leave you with a beautiful video by Brother David, a Benedectine monk who has lived much of his own life in silence, and silence's gift has blossomed in his heart to the deepest appreciation of the world.