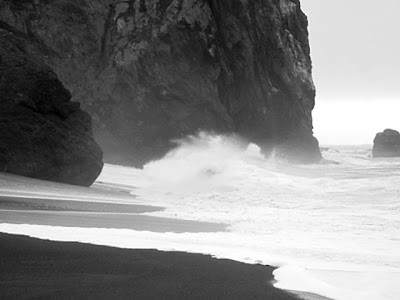 Sometimes you are going along, living your daily life with all its small joys and small sorrows, and in a moment, in a split-second, everything changes. The earthquake, the tsunami, the moment of violence, one of the infinite forms of the shockingly unexpected breaks over you; your world pivots on its axis, and when you look up, your life is no longer what it was.
Last Friday I was at Tennessee Valley Beach, north of the Golden Gate Bridge in Marin County, California. As you approach the beach through the gentle rolling hills that flank the valley, it looks placid, even a little dull. But at the last moment, where the path shifts to sand, the view opens up to magnificent, cormorant-strewn, awe-inspiring cliffs, as stark and uncompromising as the rugged cliffs of the Scottish Isles. I walked with a friend through the gray, foggy valley, and when we arrived at the beach, the waves were big, thundering up against the cliffs, the wind catching the crests and blowing the foam back like the manes of giant white horses.

Each wave had its own signature, as it encountered the coastline, each one shaped by wind and current into a unique form. I could have watched all afternoon, taking photographs of the beautiful meetings of rock and ocean. My friend wandered off toward the hills, and I stayed on the sloping beach twenty feet or so from the waves, camera in hand. 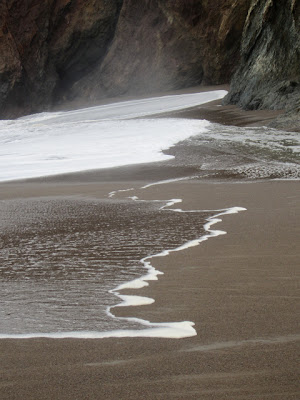 Then, in a moment, everything changed. A wave, one that seemed just like the others as it approached me, came on to the beach - and kept coming. I looked down and saw the line of foam coming my way, and then I turned and ran toward higher ground, laughing a little to myself. But the wave was faster than I was, and reached me just as I stepped into a patch of saturated sand that caught and held me as I sank into it. I fell to my knees, no longer laughing, and the wave came over the berm and surrounded me, filling up the lower area of the beach where I was.
I scrambled up, holding my camera above the water, soaked to the waist and frightened, realizing that no one could see me on this part of the beach, and that I must find a way to get out of the water before the wave turned and headed back oceanward, carrying me with it. I made it to a higher area and then watched the water continue to fill where I had been, turning the moments-before bare sand beach into a swirling, deep pool. Then, as the wave retreated, its force was strong enough to erode the area where I stood, and I had to move still further away as the wave ate away at my refuge.
Afterward I stood and watched the waves again, and they were as they had been before, breaking many feet away, acting just as one would expect waves to act. My friend returned and I explained what had happened, though it must have seemed unreal, a story from dream or nightmare. I had heard of "rogue waves," but had never really believed that people could be swept off beaches into the ocean by a wave they never saw before it engulfed them.
We watched for a long time, and no wave came up the beach and over the berm again. I was wet but fine. Nothing much had happened, but my body knew that it had felt a moment where everything could have changed, when a great force meets an individual life and wrenches it, irrevocably, into a new story, or the end of the story.
*     *    *    *
I have another friend who spent years as a climbing guide in Nepal and South America, but later returned to his hometown (and mine) in Indiana. We try to have adventures together, every once in a while. Our best one was a few years ago, when we spent a joyous few days climbing together in Joshua Tree, sleeping out on big slabs of granite, walking the sandy washes, laughing and joking and eating camp food. My memories of that trip are still vivid and sweet. 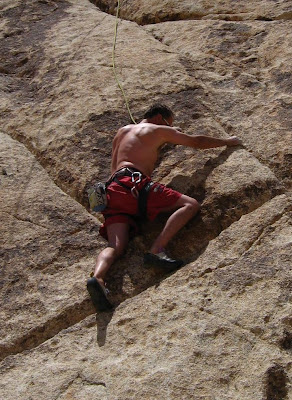