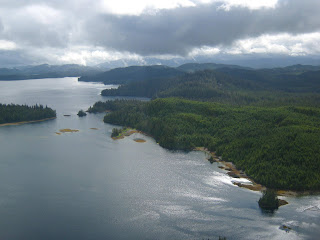 I'm back from three and a half weeks of work in Southeast Alaska, where I hunted rare plants as part of a team of botanists on the Tongass National Forest.
We worked on mountaintops, cliffs, salt marshes, beaches, bogs, lakes, meadows and old growth Sitka spruce forests on about a half dozen islands west of Ketchikan, most of which most people have never heard of: Prince of Wales Island (the fourth largest island in the US), Heceta Island, Whalehead Island, Blashke Island, Kosciusko Island, and Tuxekan Island, all in the Alexander Archipelago, made up of over a thousand islands off the west coast of the Alaskan mainland.
This was my first trip to Alaska. I've avoided Alaska all this years because -- and I'm just going to be really honest about this -- I'M AFRAID OF BEARS. I'm somewhat rational about this: I'm much more afraid of grizzlies than I am of black bears. But I'm also embarrassingly afraid of black bears. Embarrassing because as a field biologist for nearly twenty-five years, I should know better, or at least be a little less paranoid than some city slicker. I wouldn't have taken the job if it had been in grizzly country, but Prince of Wales only has black bears. More about bears later.
As a Southeast Alaska newbie, I wasn't sure what to expect. I had ideas - large bearded men, rain, insects, wildlife, big trees. But it's a long way from one's ideas about a place to the actual, living place. Still, some of my ideas were more or less accurate....
Large bearded men? Check - although there weren't many people on Prince of Wales, where there were men, they tended to be large and scruffy and bearded, though quite friendly. (Here's an Alaska joke for single women: "The odds are good but the goods are odd.") It's a guys' place, with an emphasis on functionality and a de-emphasis on aesthetics. In the few tiny settlements, trucks lay rotting in the weeds, minus their tires (imagine the difficulty and expense of getting a dead truck off a remote island); houses looked like they'd been put up in an afternoon a half century ago and never painted again, and blue tarps reigned supreme. One is visible as a make-shift door in the photo below. There was even a spectacular collection of enormous, long-abandoned and rusted logging equipment, called, with some heavy irony, "The Logging Museum". 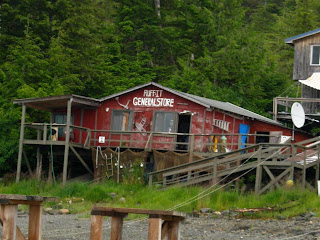 The Ruff-It General Store, accessible only by boat. Whale Pass, Prince of Wales Island
Rain? Check - it rained nearly every day we were working, and on the rare days when it wasn't raining or drizzling, the underbrush was so wet that it might as well have been raining. We never really dried out, just like everything and everyone else there. The whole place is dripping wet, a great big sponge soaking up the North Pacific storms. About half the "land" is muskeg, which is essentially a spot that hasn't dried out since the last Ice Age, covered in layers of peat and sphagnum moss and carnivorous plants and little ponds and too wet even for most trees. There is no point to wearing any clothing other than layers of fleece, and no point wearing any footgear other than high rubber boots (more on those later too), preferably ones with cork spikes in the bottom ot prevent slipping off the giant wet mossy logs that must be clambered over to get anywhere. 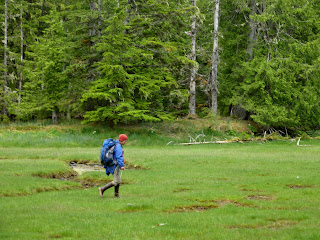 That's me, in XtraTuf boots and rain-gear, walking through a saltmarsh.
Photo by Emily Drew.
Insects? They weren't as bad as I had feared, except for "white socks", little flies that removed chunks of flesh from our faces and necks, then worked their way under our clothing. I wouldn't know I'd been bitten (they must inject some anesthetic) until I touched my face and felt dried streams of blood. Sometime after the initial bite - hours or days later - the spot would begin to swell and itch. The itch would build to a nearly unbearable intensity, and all our faces were swollen and bloody, like sixteen-year-olds with terminal acne. It lasted about a week, until the next set of fly bites. 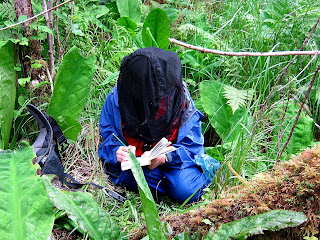 Me again, bug-netted, trying to document a rare plant location in a skunk cabbage swamp.
Photo by Emily Drew.
And bears? What Prince of Wales Island lacks in grizzlies, it makes up for in black bears, which like everything in Southeast - trees, slugs, devils-club, skunk cabbage - are prone to a certain gigantism. The bears on Prince of Wales are the largest black bears in North America. And like the rain, they are everywhere. I mean EVERYWHERE. Big piles of dark bear scat litter the sides of main roads, line every game trail, stand like proud monuments out in the middle of meadows, and even show up on the tops of mountains. It doesn't seem possible that any animal smaller than an elephant could produce such humongous dumps. I can't even begin to express how large these things are - the scat that is, not to mention the bears themselves, which we encountered nearly every day.
Despite an ecological understanding of the importance of large carnivores, I have to admit that I prefer my woods without bears, or, if there are bears, I prefer my bears to be secretive and shy. The bears OWN Southeast Alaska, as far as I could tell.
All that aside, though - even as I chronically damp, nervous, and covered in intensely itchy welts - every day was a wonder, an amazing encounter with a land and creatures beyond what I had ever imagined seeing. I feel grateful and lucky to have had the opportunity to work in those primeval forests, on uninhabited islands, in a dreamlike place of mists and water.
It's been hard to begin to write about it, perhaps because the scale of the experience was so large, so multi-layered. I pull one thread and a whole island lands in my lap, mud and moss and forests and all. Or perhaps because it was so far beyond what I've experienced before - flying in a small helicopter a few hundred feet above the ocean, listening to the breathing of humpback whales, walking alone along the edge of a cliff, standing in places where there is no one else for many miles, happening upon courting, bugling sandhill cranes in hidden meadows. 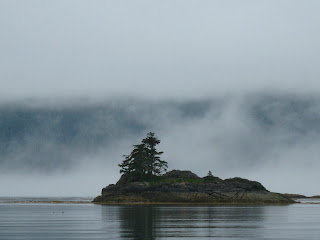 I hardly know how to share it. I think the only way is in little glimpses, vignettes, like getting on to one's hands and knees and looking at the moss gardens in the muskeg, up close.
So, in the next series of posts, over the next few weeks, Southeast Alaska, glimpsed.
Posted by Florence