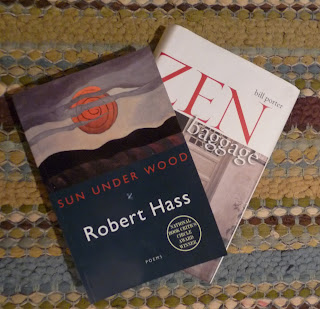 The Saturday before last I spent the afternoon at Green Gulch Farm, my old haunt in a valley on the Marin coast just north of San Francisco, then drove the curves of Highway 1 high above the Pacific, then past Bolinas Lagoon and up Bear Valley, where the San Andreas fault separates the North American tectonic plate from the oceanic tectonic plate, and thence to the tiny town of Point Reyes Station,at the southern end of Tomales Bay.

Two of my literary heroes were reading and speaking together in Pt. Reyes that night: Robert Hass, two-time poet laureate, and Michael Ondaatje, Sri-Lankan-born author of The English Patient and other great novels. I had found out about the talk two days before, and had been almost beside myself with excitement about it.

Why, you might wonder, are two towering world literary figures hanging out in a small town in West Marin on a Saturday night? Well, they're locals- Robert Hass lives in Inverness, just across Tomales Bay from Point Reyes Station, and Michael Ondaatje spends the winter in Marin. And they're old pals. In fact, they even look alike - both grey-haired, a little short, a little paunchy, with kind faces and laugh lines around their eyes. They were doing a benefit for the Tomales Bay Library Association, which sends writers into the local schools, teaches English to ranch workers, and hosts a major literary conference every couple of years, the last one dedicated to the memory of Wallace Stegner.

As I sat in the Point Reyes "Dance Palace", the local community center, waiting for the talk to begin, I was reading the book I'd brought along, Bill Porter's Zen Baggage: a pilgrimage to China. Bill Porter, come to think of it, would have fit right in that night - he's also gray-haired, a bit round, with laugh lines around his eyes, and he's also one of my literary heroes.

Bill lived for years in Taiwan, some of those years in a Zen monastery, then started translating ancient poetry from Chinese. He and his wife came to the US a number of years ago, and now he is one of the pre-eminent translators of Chinese Buddhist sutras. Sutras are teachings of the Buddha or expositions by great teachers on Buddhist philosophy, often quite deep and difficult to understand. Translating Buddhist sutras does not make one rich: in one of his books he thanks the local food bank in his acknowledgements. His pen name is Red Pine.

Zen Baggage is the story of one of his recent wanderings around China. That night, as I sat on a hard chair in the Dance Palace waiting for my heroes, I read about a cave he visited in the Taihang Mountains. From 581 to 1100 AD, more than a thousand Buddhist sutras, each one many thousands of lines long, were carved into the stone walls of a series of nine caves. In 1100, the caves were sealed, and they were only unsealed in 1956. Every inch of these caves is covered with ancient sutras. The versions of the sutras in the caves are in many cases older than any other known version. Paper and books can be burned; stone has a way of staying around. 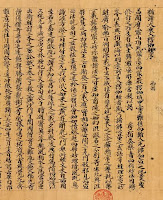 As Bill wandered around the caves looking at all the words, he thought of the Lankavatara Sutra, and he quotes a long passage from it: "a noble son or daughter [a Buddhist practitioner] should not become attached to words, because what is true is beyond words. ...if someone points to something with their finger, and a foolish person looks at their finger, they won't see what it is pointing at. In the same manner, foolish people become so attached to the finger of words, they refuse to abandon it to grasp the truth, even at the point of death..."

Bill appreciates the irony of this - the Lankavatara Sutra, which was revered by early Chinese Buddhists, was undoubtedly carved in stone somewhere in those caves. Monks spent years of their lives painstakingly carving words - were they attached to them? How could they not be?

After reading that passage, I had to put the book down, because Robert Hass and Michael Ondaatje were coming on stage. For the next two hours I was filled with nearly unceasing happiness at the beauty of the language in the room. Robert Hass read first. I'd been reading his poetry for years, but I'd never heard him read aloud. In his mouth his words came alive in a new way, imbued with his humility, his honesty, his willingness to be moved and amazed by the world around him. One poem was about feeling like the shadows underneath pine needles on a spring day....

I'm no fool - I know that authors are often at their best in their language, and in person are arrogant alcoholics or worse - but I couldn't help liking Robert Hass. And his writing, which had impressed me for a long time, was suddenly full of sparkles, like sunlight on water, alive in a new way for me.

Then Michael read. I read The English Patient when it was first released and won the Booker Prize, and I had thought then that it was a masterpiece (the film adaptation, as good as it was, didn't even come close to the book). To be in the presence of someone who could write a book like that...to hear his language, and to hear him talk with his old friend Robert Hass and with the audience about his writing process - well, it was extraordinary.

As I walked out into the misty night air, I considered the power of words in those two men. Their words had raised $3,000 for the Tomales Bay Library Association that night - an organization dedicated to words and to the sharing of them - and a hundred people or so had spent their evening, eyes alight, in the presence of great language and humanity.

Robert Hass's gift lies in the most minute and loving attention to detail - to the detail of a lover's shoulders, the detail of a bird's song, the detail of a facial expression or fleeting emotion - and yet that description, no matter how good, is only a simulacrum of the real thing - that pine needle, there, the needle on the tree that perhaps he looks at every day outside his office window; that actual lover, maybe not quite the woman that he saw and wrote about. I once wrote an essay about a relationship, trying to be honest and true...when the person who was the other half of that relationship read the essay, he said, "Very nice, but you know, it's fiction." And he was right. All writing is fiction. "What is true is beyond words," as the Lankavatara Sutra says.

Ah, but the beauty of words! What they can do to us! There is the beauty of the bird in the sky, but sometimes we only see it in a poet's words about the bird, revealed in its poignancy. A memory of a visual image, turned into language, written down, then heard or seen and brought into the mind of the hearer or reader, who "sees" the bird, and is stunned by the seeing. And yet, there's also a gap, between the direct experience and the re-imagined experience, and a kind of longing there, in that gap. But still, can we perhaps say that "what is true is also within words", or am I just fooling myself, caught in my own clinging to language, my own ecstatic love of language?

Later, after the talk, greedy for more Robert Hass, I looked him up on the internet and found several poems on the Poetry Foundation website that I'd never read, including one called Meditation at Lagunitas. I discovered that Robert Hass asks these same questions to himself, He says, "because there is in this world no one thing to which the bramble of blackberry corresponds, a word is elegy to what it signifies", but he keeps thinking about it, and ends the poem with, "There are moments when the body is as numinous as words... Such tenderness, those afternoons and evenings,saying blackberry, blackberry, blackberry."

So here's what I think right now... let us say - and write - blackberry - and take joy in the reading and writing, "as numinous as words", and also eat actual blackberries, the juice running down our chins, joy in both, knowing that both these words and this mouth are temporary flashings, like "dewdrops, lightning, a rainbow". There are some lines from Tennyson that have always moved me:

"Love took up the harp of Life, and smote on all the chords with might;
Smote the chord of Self, that, trembling, pass'd in music out of sight."

All the new thinking is about loss.
In this it resembles all the old thinking.
The idea, for example, that each particular erases
the luminous clarity of a general idea. That the clown-
faced woodpecker probing the dead sculpted trunk
of that black birch is, by his presence,
some tragic falling off from a first world
of undivided light. Or the other notion that,
because there is in this world no one thing
to which the bramble of blackberry corresponds,
a word is elegy to what it signifies.
We talked about it late last night and in the voice
of my friend, there was a thin wire of grief, a tone
almost querulous. After a while I understood that,
talking this way, everything dissolves: justice,
pine, hair, woman, you and I. There was a woman
I made love to and I remembered how, holding
her small shoulders in my hands sometimes,
I felt a violent wonder at her presence
like a thirst for salt, for my childhood river
with its island willows, silly music from the pleasure boat,
muddy places where we caught the little orange-silver fish
called pumpkinseed. It hardly had to do with her.
Longing, we say, because desire is full
of endless distances. I must have been the same to her.
But I remember so much, the way her hands dismantled bread,
the thing her father said that hurt her, what
she dreamed. There are moments when the body is as numinous
as words, days that are the good flesh continuing.
Such tenderness, those afternoons and evenings,
saying blackberry, blackberry, blackberry.
Posted by Florence