A Table for Four Hundred 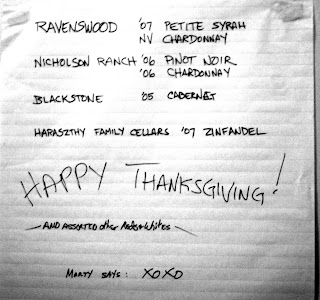 I celebrated Thanksgiving this year up in Sonoma County. Ah, it was great. We had organic roasted vegetables from local farms, a huge selection of fine cheeses, fresh organic artisanal bread, organic roast turkey, poached wild salmon, roast lamb, local pears poached in Merlot, a selection of locally-produced wines, overflowing tables of pies and deserts.... There were linen tablecloths, white napkins, china, and lovely garden flower arrangements on every table.

And this cost nothing, not for us and not for the other four hundred people celebrating together, whether poor or rich, young or old. We went up early and spent all day with about fifty other volunteers, guided by some of the best chefs in the county, turning boxes and boxes of donated organic food from local farms and from Whole Foods into a free Thanksgiving feast, and then some of us helped serve, and then we sat down at the beautiful tables and enjoyed the abundance with everyone else, just as one does at home with friends and family. 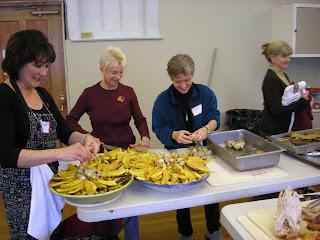 And abundance it was - an abundance of kindness, of laughter, of good will and hard work, gourmet food and great wine, all offered generously. Kids ran around everywhere, older folks in wheelchairs chatted together or with families nearby, and street people sat next to doctors, lawyers and migrant workers. The feeling in the big community center hall was like one big four-hundred-person smile.

What I found most inspiring was the way that there were no boundaries. I've served Thanksgiving in shelters, and found it very moving, but this was something else, a wide hospitality and a wide open door for whoever wanted to enter, vineyard owner or street kid. And no cheap donated old vegetables and canned food on paper plates, dressed up pitifully as a "Thanksgiving meal". This was the best of the best, served with love and pride.

It reminded me of Dorothy Day's radical Catholic teaching of how to be with the poor or homeless: "Bring them bread and roses." Not just bread: people need roses too - dignity and beauty. Herding a bunch of poor people into a line for canned cranberries and green beans is better than nothing, but it's not roses. Creating a place where everyone is welcome, where rich and poor sit down together, and where everyone is served beautiful, organic food - that's I think what Dorothy Day meant by 'roses'.

Over the years I've struggled with my relationship with Thanksgiving. On the one hand it seems like a perfectly lovely holiday, a celebration of the harvest and of gratitude. On the other hand, sometimes I feel that it has degenerated into a kind of family food orgy, the table groaning under vast plates of food, soon to be followed by a vast mess in the kitchen and the next day by Black Friday, the beginning of the Christmas buying frenzy. Maybe it's because most of us don't grow our own food, so the food has lost its connection to the land and its abundance. Perhaps my problem is a feeling that in a country that has grown fat on the wealth of the world, something is subtly off about a holiday that's primarily about consumption.

Some years I've fasted for the day. A few times I treated it as a normal work day - it was a fabulous day to get a lot done and I had an entire six story building to myself. But those things didn't feel quite right, as if I was out of step with something quite important, even primal. Last year I served a Thanksgiving meal in a shelter in Flagstaff, Arizona - not a very good Thanksgiving meal, to be honest, served amidst the bunk beds in a cold concrete-block building - but the gratitude on the faces of the men there was palpable, and I felt like I was finally touching something closer to the way I want and need to celebrate this holiday.

This year I'm in the Bay Area, and although there are plenty of poor people here, there aren't many free Thanksgiving meals, especially outside the churches and Salvation Armies. I was spending Thanksgiving with a friend who is allergic to organized religion, so those places were not possibilities for us. When I found out about the Sonoma Thanksgiving, I was intrigued by the idea, and my friend was particularly delighted about the organic turkey, so we traveled an hour north into the little town of Sonoma, and proceeded to have so much fun that I'm surprised it was legal.

I don't know why 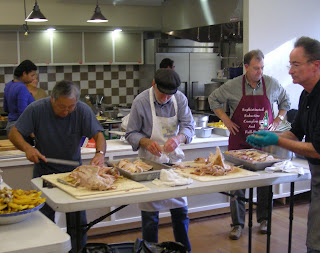 it's SO MUCH FUN to work really, really hard to make a free Thanksgiving, but believe me, it is. My friend carved organic turkeys to his heart's content, to the admiration of the other guys. I had the rather amusing job of trying to serve roasted parsnips to a highly skeptical crowd, "What are those? Parsnips? What are they? What do they taste like? No thank you." (A hint to other Thanksgiving volunteers: don't get stuck with the parsnips.)

Nonetheless, it was great. At the end of the day, after helping with the mountain of dishes, we were exhausted and utterly happy. The four-hundred-person smile had seeped into us and our sense of a true participation in 'Thanksgiving' was deep and complete.

Maybe the message of Thanksgiving is not just abundance, but generosity. Perhaps that's why we were so utterly happy - we had spent the day drenched in generosity, poached in generosity like those pears in Merlot (mmmmm...those were good).

Many thanks to Gary Edwards, the mastermind behind the Sonoma Community Center Thanksgiving, who somehow coordinated a bunch of raw, restless recruits and got a hundred-course meal out on time, the other great chefs and caterers, the many volunteers, the farms and businesses that donated food, and to Bob Kinsey, one of the loyal volunteers who took the photos in this post. We'll be back for the Christmas Day meal!
Posted by Florence