"The Mountains Belong to Those Who Love Them" 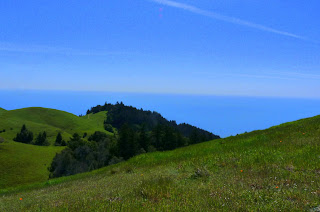 The Zen wanderer has temporarily alighted on the slopes of Mount Tamalpais, the guardian mountain that stands to the northwest of San Francisco Bay.

“Mt. Tam”, as people say around here, has been an important place to me for a couple of decades now. Green Gulch Farm, my home temple for many years, lies on its southwestern flanks in a narrow valley that leads to Muir Beach; Spirit Rock, where I’ve spend so much time in silence, lies to the north of the mountain, and on a clear day I would climb up to the ridge about the retreat center and gaze at Mt. Tam on the southern horizon.

I’ve wandered its great grassy green flowery western meadows above the Pacific, walked a pilgrimage route around it, sat with friends on the serpentine outcrops high on its slopes, slept in the dark on its northwestern flank and then woken up in deep fog, toasted the moon with wine at Inspiration Point (and gotten a ticket for being up on the peak too late), and a hundred other adventures, large and small. So now, to find myself living on the ridge above Blythedale Canyon, looking north and west to the peak of the mountain, so close it feels like I could run my hands along its rough chaparral-covered slopes…well, it’s a wonderful thing.

I’m in a studio surrounded by manzanita and coast live oak, near the end of the road and the beginning of the wild country.

My landlords are below me, in a hand-built Japanese-style house that Ed Ross, who is now 94, mostly designed and built himself, starting 60 years ago. He was an entomologist for the California Academy of Sciences for many decades, and crisscrossed India and Africa and South America and nearly everywhere else through much of the 20th century. Ed is also an extraordinary photographer, with hundreds of striking, powerful images of indigenous people from all over the world. I feel very lucky to be here for the next few months, on this land that Ed and his wife Sandy love and care for so well, sitting and writing and looking at the mountain.

Last Sunday I drove around the mountain to Green Gulch for the weekly public talk, this one given by Hoitsu Suzuki, the 70-year-old son of the late Shunryu Suzuki, who wrote Zen Mind, Beginners Mind, founded the San Francisco Zen Center, and brought Soto Zen to the West. Hoitsu stayed in Japan when his father came to America in 1959, and has lived a mostly quiet life as a temple priest at the temple that he inherited from his father.

He is my dharma great-grandfather: my teacher, Norman Fischer, was given dharma transmission (full ordination as a priest) by Mel Weitsman the abbot of Berkeley Zen Center, who was given dharma transmission by Hoitsu. So when I hear him speak, I feel like I’m hearing my great-grandfather speak. In Zen, the “feeling”, or “flavor” of a particular lineage tends to persist, and I think the flavor of Hoitsu is very gentle and warm, very unassuming and humble, “nothing special”.

Much to my delight, he talked about mountains, and what Dogen, the founder of Japanese Soto Zen in the 13th century, had to say about mountains. “The mountains belong to those who love them” is a quote from Dogen’s Mountains and Rivers Sutra (which could be translated as, "The Teachings Spoken by Mountains and Rivers”). Dogen also said that mountains are walking – we just can’t see their walking. We see what we can see, and to our little, short-lived species, mountains are static, monumental, still. But is Mt. Tam still? It is bird song and leaf-fall, underground waters, the shifting of stone, the rattle of pebbles off the trail, clouds coming and going, darkness and light and darkness and light again – with just a little shift of perception, Mt. Tam breathes and shrugs its great shoulders, gazing over the Pacific to the Farallones, breathing with me as I perch here, like a small bird in a great big tree.

Even more wonderfully, Hoitsu talked about the spirit of zazen, or meditation. He started by saying that zazen is inhalation and exhalation. And indeed it is – the breath, and the breath within the body, and the awareness of body and breath. But then he said something else. He said that zazen is also a soft, warm heart.

“A soft, warm heart”. What we do is not just what we do, or what we focus on, but the spirit we bring to it. This is true of anything, but particularly of spiritual practices. We can do a spiritual practice perfectly, but if the spirit is cold and judgmental, no amount of perfection will bring grace, to oneself or anyone else.

So that’s what I carried with me as I got up from the talk last Sunday. To remember the soft, warm heart that lives at the heart of our lives, always possible, with every breath.

Meanwhile the crows are cawing, and the wind has come up. I can see it moving the gnarled branches of the manzanitas. Gratitude to Mt. Tam, to Ed and Sandy Ross, to Hoitsu Suzuki, and to life itself, which can bring such sweetness.


Hoitsu Suzuki's talk will be posted in the next week or two, here.
Posted by Florence